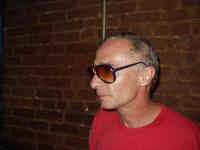 Graham Parker was heard to say 'this record rocks like a safari park chimp.'

This coming June 7th we'll see the release of GP's second disc on Bloodshot Records. The new collection, sarcastically titled »Songs of No Consequence,« features new songs like »Bad Chardonnay,« »Suck 'N' Blow« and »She Swallows It«. It rocks our socks off! For any of you who knew this »angry young man« back in the hey-days of his career, get ready his 21st Century edition of pub rock!

'Songs of No Consequence' continues GP's run as one of Rock and Roll's legendary figures. His pen is as sharp as ever (long known as one of the most literate, biting writers ever to ply the trade), as is his effortless coupling of punk's energy and American R&B and soul's swagger. Joining him on this go round are The Figgs, who last recorded with him on the live LP 'The Last Rock and Roll Tour' and bring a solid eight-ball-in-the-hip-pocket barroom strut to GP¹s consummate song craft.

GP has been threatening to use The Figgs on a studio record for some time, and, finally, some songs that have been waiting around for the right situation to present themselves found kindred spirits in the bands' talents.
The whole enchilada was whipped out in nine panicky days in the studio, a testimony to their no-nonsense hard work ethic and under-appreciated skills as musicians and arrangers.

Even after countless television appearances (including the Tonight Show and the Late Show with David Letterman), immeasurable critical recognition (featured in Rolling Stone's Top 500 Records of All Time), and a heap of major label recordings, Graham Parker isn't showing any signs of stopping.