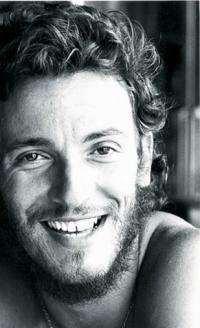 Bruce Springsteen re-teams with producer Brendan O'Brien on his 19th album, »Devils & Dust«, which Columbia will release on April 26. The 12-track set follows the format of Springsteen's '90s studio work, in which he was surrounded by a rotating cast of collaborators, including some members of the E Street Band.

The title cut has been in Springsteen's catalog for several years, and was dusted off in soundchecks for the E Street Band's run on last fall's Vote for Change tour, but never performed at a show.

Two of the tracks -- »Long Time Comin'« and »The Hitter« -- date back at least 10 years and were performed during the tour in support of the 1995 album »The Ghost of Tom Joad«.

Like much of the material on that set, the songs are both first-person narratives, using details and fragmented scenes to sketch out a life's story. The first is about a father celebrating the optimism that comes with an awaited child; the second about a street fighter nearing the end of an unenviable career.

Springsteen will tour in support of the new album, but no details have been announced as to who will back him or what size venues he will play.

»Devils & Dust« is the artist's first studio album since 2002's O'Brien-produced »The Rising«, which debuted at No. 1 on The Billboard 200 and has sold 2.09 million copies in the United States, according to Nielsen SoundScan. The tour in support of the set grossed $221.5 million from 121 shows reported to Billboard Boxscore.

As previously reported, Springsteen won a Grammy on Sunday for best solo rock vocal performance for the »Code of Silence«, which was released on the 2003 collection »The Essential Bruce Springsteen«.