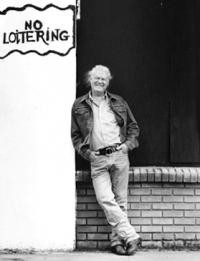 As a living lightning rod for the blues, Billy Joe Shaver is one rough 'n' rowdy Texan who's experienced more than enough joy and pain in his sixty-three years to ever have to go begging for material.

Like Hank Williams, Woody Guthrie, and Jimmie Rodgers, Billy Joe has lived the songs he sings--when it's about love, he's embraced it; when it's about grief, he's writhed in it; and when it's about screwing-up, well, Lord knows he's done it. When Shaver kicks his to-the-bone tales back our way, they smack of irrefutable truth--a truth that's delivered with simple, poetic grace.

Billy Joe's never been a stranger to hard knocks (many, to be sure, self-inflicted), but the past few years have been brutal. Following the loss of his wife and his mother less than a month apart to cancer, he--with the aid of his guitarist son Eddy--wrote and recorded The Earth Rolls On, an extraordinarily gripping exploration of guilt, regret, devotion, love and redemption that was roundly acclaimed as one of 2001's finest works.

But before that disc could even hit the shelves, Eddy succumbed to his long battle with drugs, fatally overdosing early in the morning of December 31st, 2000. Deprived of his family and numb with grief, Billy Joe carried on with all he had left--his music.

Through the first half of 2001, an ailing, hard-traveling Shaver contended with (and ignored) heart and health problems, the neglect of which culminated in a heart attack on-stage at a July 4th show at Gruene Hall in New Braunfels, Texas.

»To tell you the truth, I didn't really care if I died,« Billy Joe admits. A friend drove him back home to Waco where, when told he had a mere 5% blood-flow entering his heart, Shaver finally submitted to quadruple bypass surgery to clear his arteries.

»I guess I should have gone then,« he says looking back, »but there's obviously some reason why I'm still here.«

Blessed with rejuvenated health and a renewed sense of purpose, the blue-collar troubadour has since recorded the brand-new Freedom's Child for Houston-based Compadre Records. Yet another powerhouse collection of correspondence from the trenches of life, the disc presents more than a dozen new Shaver originals that stand as some of the most spirited and affecting compositions of his Herculean career.

»Writing's the cheapest psychiatrist there is,« swears the ol' five-and-dimer. »The songs give me comfort.«

For Freedom's Child, Billy Joe reunited with legendary producer R.S. Field (Allison Moorer, Sonny Landreth, John Mayall, Todd Snider), who had helped make Shaver's 1993 album Tramp On Your Street one of the very best of his sterling career. Accompanied by a hand-picked studio band of gutbucket musicians that includes guitarists Jamie Hartford and Will Kimbrough, drummer Jimmy Lester, and bassists Keith Christopher and Dave Roe (BR549), the battle-scarred outlaw returns at the very top of his game.

»We worked hard in the studio,« says Shaver, »and the songs came fast this time.«

»Freedom's Child« is a muscular, accomplished romp down old rails on a well-oiled, reconditioned human-freight train. From the stompin' giddy-up of the title song to the driving »Deja Blues« to the chicka-boom Johnny Cash tribute of »That's Why the Man in Black Sings the Blues« and beyond, Billy Joe & company combine masterful command with new-born freshness.

You'll revel in the gentle benediction of »Hold On To Yours (And I'll Hold On To Mine),« add tears to your beer on »Drinkin' Back,« go rubber-legged as Shaver conjures Jerry Lee Lewis with the randy »That's What She Said Last Night,« two-step to the swinging re-make of »Good Ol' U.S.A.« (»There ain't no 'bad' in that song,« explains Billy Joe), choogle along to the back-porch, Creedence kick of »Corsicana Daily Sun,« and just flat-out flip yer wig to the mad-cap »Wild Cow Gravy.« Suffice to say, there ain't a runt in the litter.

From the sublime to the silly, Freedom's Child finds Billy Joe Shaver flaunting his unsurpassed mastery of a full spectrum of Southern musical influences--a mastery attained the old-fashioned way...

Born dirt-poor in Corsicana, Texas in 1939, Billy Joe witnessed a mesmerizing Hank Williams concert in the late-'40s, and although he would take a few detours along the way, he sensed early on that his salvation would lie in country music. Following an ill-advised stint in the Navy (he was honorably discharged after fighting with an out-of-uniform officer), a sawmill accident claimed most of the fingers on his right hand and Shaver's days of manual labor were over.

The handwriting was on the wall--it was time to reconcile himself to his poetic talents, and it was time to buckle down and learn how to play guitar.

In 1966, Billy Joe hitched a ride on a cantaloupe truck to Nashville, where he eventually landed a $50-a-week job writing songs for Bobby Bare's publishing company. Combining a remarkable gift for penning unforgettable, character-driven songs with an unbridled, hell-bent personality/lifestyle that defied fiction, Shaver soon became a legendary figure in the '70s Outlaw country movement.

A staunch individualist known for shooting from the hip, Shaver quickly became the songwriters' songwriter--he wrote 90% of Waylon Jennings' 1973 landmark Honky Tonk Heroes album, released three fine solo albums in the '70s (Old Five And Dimers Like Me {produced by Kris Kristofferson}, When I Get My Wings and Gypsy Boy) and churned out a seemingly endless string of priceless songs that included »Ride Me Down Easy« and »Restless Wind« (Bobby Bare), »Old Five & Dimers Like Me« (Bob Dylan), »(Just Because) You Ask Me To« (Elvis Presley, Waylon Jennings), »I Couldn't Be Me Without You« (Johnny Rodriguez), »Sweet Mama« (Allman Brothers), »Good Christian Soldier« (Kristofferson), and more.

But even as his professional profile was soaring, Shaver's personal life--dogged by drink and drugs--hit rock bottom.

»I was in terrible shape,« he recently told the Houston Press, »and that was when I went up on the mountain out there and got right with God. I was comin' down this big cliff in the middle of the night, and He just gave me half of that song 'Old Chunk of Coal.'«

The song would prove to be the biggest of Shaver's career to date, but the 1980s would be a time of transition and readjustment. He recorded I'm Just An Old Chunk Of Coal and Billy Joe Shaver for Columbia, but when his last album for the label--1987's Salt of the Earth --failed to sell in substantial numbers, Shaver took it as a sign.

Teaming up with his son Eddy, Shaver forged a mercurial hybrid that spot-welded Eddy's blistering electric guitar licks to the old man's earthy honky-tonk, and the duo set out on a non-stop club tour that would span the balance of the '90s. Beginning with 1993's R.S. Field-produced Tramp On Your Street (a record that re-established Billy Joe's position as an incomparable singer, songwriter, and performer), the two unleashed a string of stellar recordings that included Unshaven: Shaver Live At Smith's Olde Bar, Highway of Life, Victory, Electric Shaver and, finally, the tragic/mythic The Earth Rolls On.

Which brings us back again to the here and now. The glorious, insightful tunes that make up Freedom's Child simultaneously attest to the cold, hard truth of its predecessor's title while triumphing--once again--over the bitterest realities that Life can dish out.

Billy Joe Shaver songs are the real-est of real deals. They don't mince words, and they don't sugarcoat the truth. Funny or melancholy, celebratory or mournful--Shaver's songs zero in on the heart of the matter, which is--after all--why they matter to the heart.