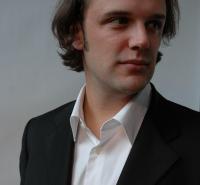 to realease »Lullaby« album in December.

The prolific Mark Erelli is set to release his 2nd album of 2006 in December. This special solo acoustic recording called Innocent When You Dream is a collection of lullabies and ballads. The album was originally intended as a gift for friends who had recently become parents. Mark was so pleased with the results that he decided to release it.

The album won't be sold in stores, but will be available at signaturesounds.com by December 1st.