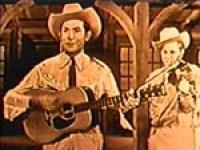 Every good honky tonk song touches on Hank Williams, a tear in the beer and jail. And it became too real for Stephen Shutts, co-owner of the traveling Honky Tonk Hall of Fame based in Nashville, Tenn. Shutts turned himself in to Nashville police on Monday after a warrant was issued for his arrest in conjunction with the alleged theft of a
59-year-old Hank Williams songbook valued by music experts at as much as $250,000.

'Not hiding from anybody'
The songbook was first written about in the Sept. 3 Chicago Sun-Times. The story detailed how Shutts and Honky Tonk Hall of Fame co-owner Robert Reynolds obtained the book, consisting of 20 handwritten,
unpublished Hank Williams lyrics and song fragments. Since the Sun-Times story was published, Sony/ATV Music Publishing officials have been trying to retrieve the archive. On Sept. 20, Sony filed a theft report with Nashville police. A warrant was also issued for the arrest for Francine Boykin, a former custodian at Sony/ATV. She turned herself in to Nashville police on Monday. Boykin, 50, and Shutts, 42, were each charged with felony theft and released on $2,500 bond each.

According to Nashville police, Boykin was fired more than a year ago after she was implicated in the theft of CDs from the company's offices. Boykin claims she found Williams' notebook in the trash, took it and
sold it to Shutts.

In September, Shutts told the Sun-Times he was contacted by Boykin, who had the songbook and insurance documents from Roy Orbison. Shutts said he purchased the songbook for an undisclosed amount and at the time was unable to disclose the seller's name.

Shutts, Reynolds and Boykin are not commenting on the case. Calls to Sony/ATV CEO Troy Tomlinson were not returned.

»The notebook is in safekeeping,« said Wayne Halper, Shutts' attorney. »My client is a preservationist and archivist. He would never do anything to diminish the value of this notebook. We're not hiding from anybody. If my client wanted to run, he would have sold it to Japanese investors who would be happy to pay a lot of money for the book.«