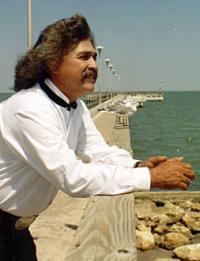 Freddy Fender, the »Bebop Kid« of the Texas-Mexico border who later turned his twangy tenor into the smash country ballad »Before the Next Teardrop Falls,« died Saturday. He was 69.

Fender, who was diagnosed with lung cancer in early 2006, died at noon at his Corpus Christi home with his family at his bedside, said Ron Rogers, a family spokesman.

Over the years, he grappled with drug and alcohol abuse, was treated for diabetes and underwent a kidney transplant.

Fender hit it big in 1975 after some regional success, years of struggling — and a stint in prison — when »Before the Next Teardrop Falls« climbed to No. 1 on the pop and country charts.

Born Baldemar Huerta, Fender was proud of his Mexican-American heritage and frequently sung verses or whole songs in Spanish. »Teardrop« had a verse in Spanish.

»Whenever I run into prejudice,« he told The Washington Post in 1977, »I smile and feel sorry for them, and I say to myself, `There's one more argument for birth control.'«

»The Old Man upstairs rolled a seven on me,« he told The Associated Press in 1975. »I hope he keeps it up.«

More recently, he played with Doug Sahm, Flaco Jimenez and others in two Tex-Mex all-star combos, the Texas Tornados and Los Super Seven.

He won a Grammy of Best Latin Pop Album in 2002 for »La Musica de Baldemar Huerta.« He also shared in two Grammys: with the Texas Tornados, which won in 1990 for best Mexican-American performance for »Soy de San Luis,« and with Los Super Seven in the same category in 1998 for »Los Super Seven.«

Among his other achievements, Fender appeared in the 1987 motion picture »The Milagro Beanfield War,« directed by Robert Redford.

In February 1999, Fender was awarded a star in the Hollywood Walk of Fame after then-Texas Gov. George W. Bush wrote to the Hollywood Chamber of Commerce endorsing him.

He said in a 2004 interview with The Associated Press that one thing would make his musical career complete — induction into the Country Music Hall of Fame in Nashville.

»Hopefully I'll be the first Mexican-American going into Hillbilly Heaven,« he said.

Fender was born in 1937 in San Benito, the South Texas border town credited for spawning the Mexican-polka sound of conjunto. The son of migrant workers who did his own share of picking crops, he also was exposed to the blues sung by blacks alongside the Mexicans in the fields.

Always a performer, he sang on the radio as a boy and won contests for his singing — one prize included a tub full of about $10 worth of food.

But his career really began in the late '50s, when he returned from serving in the Marines and recorded Spanish-language versions of Elvis Presley's »Don't Be Cruel« and Harry Belafonte's »Jamaica Farewell.« The recordings were hits in Mexico and South America.

He signed with Imperial Records in 1959, renaming himself »Fender« after the brand of his electric guitar, »Freddy« because it sounded good with Fender.

Fender initially recorded »Wasted Days« in 1960. But his career was put on hold shortly after that when he and his bass player ended up spending almost three years in prison in Angola, La., for marijuana possession.

After prison came a few years in New Orleans and a then an everyday life taking college classes, working as a mechanic and playing an occasional local gig. He once said he sang in bars so dingy he performed with his eyes shut »dreaming I was on `The Ed Sullivan Show.'«

»I felt there's no great American dream for this ex-Chicano migrant farm worker,« he told the AP. »I'd picked too many crops and too many strings.«

But his second break came when he was persuaded to record »Before the Next Teardrop Falls« on an independent label in 1974 and it was picked up by a major label. With its success, he won the Academy of Country Music's best new artist award in 1975. He re-released »Wasted Days and Wasted Nights« and it climbed to the top of the charts as well.

»We have our feet in different worlds and different cultures,« she said. »We have our roots music ... but then we branch out to other things, pick up different styles. I think he was the precursor to Los Lonely Boys.«

Fender's later years were marred by health problems resulting in a kidney transplant from his daughter, Marla Huerta Garcia, in January 2002 and a liver transplant in 2004. Fender was to have lung surgery in early 2006 until surgeons found tumors.

»I feel very comfortable in my life,« Fender told the Corpus Christi Caller-Times in August. »I'm one year away from 70 and I've had a good run. I really believe I'm OK. In my mind and in my heart, I feel OK. I cannot complain that I haven't lived long enough, but I'd like to live longer.«

Rogers said Fender will be brought back to San Benito for a funeral and memorial services. Details on the arrangements were pending.