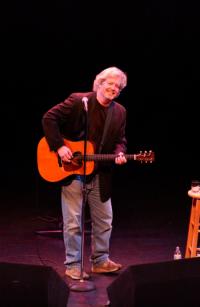 Hey, it's only been ... 34 years
FOR WILLIS ALAN RAMSEY, A SECOND ALBUM MAY BE ON THE WAY
Eric Harrison - Houston Chronicle
http://www.chron.com/disp/story.mpl/ent/4246516.html

In 1972, at the age of 21, Willis Alan Ramsey recorded the collection of songs that Lyle Lovett has proclaimed »one of the greatest records of all time.« The self-titled album put Ramsey in th top ranks of the then-burgeoning Texas singer-songwriter movement alongside such talents as Townes Van Zandt and Guy Clark.

Then Ramsey dropped from sight. Other artists recorded his songs — from Clint Black and Waylon Jennings to Shawn Colvin and Jimmy Buffett, from Jerry Jeff Walker and Jimmie Dale Gilmore to America and the Captain and Tennille (who turned his Muskrat Candlelight into Muskrat Love). His
work influenced a generation of musicians, Lovett not the least among them.

In Jan Reid's 1974 book The Improbable Rise of Redneck Rock, Ramsey said he was working on new songs and would record an album »as soon as I get the material together.« There were rumors of a new recording in 2000 and again in 2003, but it never appeared.

For sure, new songs surfaced now and then. Lovett included Ramsey's Sleepwalking on his Texas songwriters tribute album Step Inside This House and also has recorded North Dakota, which he co-wrote with Ramsey,
and That's Right (You're Not From Texas), co-written with Ramsey and his wife, Alison Rogers. Eric Clapton recorded Positively. And, in the scattered appearances Ramsey has made in recent years, he has performed some of his new songs.

But when people asked about that long-rumored second album, he was less likely to answer them seriously as retort, »Was something wrong with the first one?«

A different Ramsey phoned last week from his home in Wimberley, however. He was eager to talk about his next record, which he promised was almost finished. It'll be out, he says, »in the next month or so.«

It even has a name: Gentilly.

Ramsey will play songs from it when he performs tonight at McGonigel's Mucky Duck, his first Houston-area performance in three years.

»They don't let me out much,« he said, explaining the scarcity of his performances. »I've been in the studio.«

Ramsey acknowledged that »I'm probably not your best reference at this point« when it comes to giving an exact release date. »I've been thinking I'm having a record coming out for 30 years,« he said.

His manager, Ken Kushnick, said the record is in the final stages of mixing and would be released »within three or four months.«

Ramsey stressed that the record this time is no pipe dream, reeling off the names of musicians who have made the trek to Wimberley to help him record it in his home studio.

They include co-producer Jamie Oldaker, a drummer who played on some of Eric Clapton's hits (Lay Down Sally, I Shot the Sheriff). Others include bluegrass musician Sam Bush, Mickey Raphael, who plays harmonica for Willie Nelson's band and Viktor Krauss, who plays bass for Lovett.

Ramsey plans to sell the record on his website www.willisalanramsey.com and at his concerts, although Kushnick says there is a chance he eventually will sign with a prominent indie label if sales are good enough to allow him to sign on his own terms, which include controlling how the record is marketed.

The long wait between records has much to do with a dispute between Ramsey and Shelter Records, which distributed the first album.

Although he talked openly about his life and career, Ramsey remained vague about the reason for the dispute, though he stresses that it wasn't the fault of Leon Russell, who founded the label and nurtured the talent of artists including Ramsey, Tom Petty, Phoebe Snow and others.

»There were issues with artists at Shelter,« Ramsey said. »Artists didn't feel like they were supported. It was a great label, but it was kind of squirrelly, too. But Leon was fantastic. He was always fabulous.
... I can't say enough good things about him,« Ramsey said.

Ramsey's beef, whatever it was, exactly, was with Denny Cordell, the producer who started the label with Russell and eventually took it over when Russell left to start a new label.

Snow urged Ramsey to change labels. She got free by buying out her contract. That wasn't an option for Ramsey, he said, because »I wasn't making any money, so I couldn't jump ship. And there wasn't anybody
lined up to make another record with me.«

Ramsey also complained about the changing music scene back then and the disappearance of listening rooms to play and said he was overwhelmed by the fast-pace of the industry.

Noting that he was 19 and 20 when he recorded his first record, with the help and encouragement of Russell, Greg Allman, J.J. Cale and Dickie Betts, he said, »I was in over my head. I got dizzy.«

Ramsey eventually moved to London and then to Scotland, where he studied Celtic music and narrative music traditions. »There's always been a strong literary curiosity in my family,« said Ramsey, who is of Scottish
descent. While living in an old signal tower near Edinburgh, he said, he also »figured out where I came from, the precedent for people behaving the way they did in my family.«

While back in the United States in the late 1980s to renew his visa, he met a fellow Texas songwriter, Rogers, and fell in love. She didn't want to move to Scotland and he didn't want to return to Texas, so they
settled in Nashville and got married.

They moved to Wimberley about three years ago.

Until the last couple of years, when he began working on the album in earnest, Ramsey played a handful of dates per month, said Kushnick. He's renewing that schedule now that the album is in the final stages of mixing.

He'll begin an extensive tour when it is finished.

The title of the new record is in part a reference to the Gentilly district of New Orleans, which is mentioned in one of the songs, but the term also was used in the 19th century in the South as a disparaging term for »the upwardly mobile nouveau riche,« he said, describing it as something of a counterpoint to »hillbilly.«

»I tend to not think of myself as being a Texas singer/songwriter so much,« said Ramsey, who was born in Alabama and moved to Dallas with his parents when he was 10.

»I'm from the South originally,« he said, indicating that his music reflects that.

»I've been fortunate enough to grow up in Texas and be exposed to the incredible music here, but all my relatives and my parents ... you're in the South when you go home. You open the door and walk into the South.«