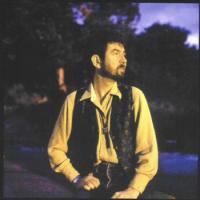 
On 31 October, Eagle Rock Entertainment will release the documentary film »The Passing Show: The Life & Music of Ronnie Lane« on DVD.

The film tells the story of his rise to fame with the Small Faces and later the Faces, his experiments with a rural life and the touring musical circus that he dubbed The Passing Show. Finally it charts his latter days once he developed Multiple Sclerosis. Featuring numerous musical clips and interviews with family, friends and colleagues

Additionally, Ronnie worked with Pete Townshend (The Who) on the album »Rough Mix«. Ronnie Lane's Slim Chance supported Eric Clapton's 1977 UK tour. Eric appeared with Ronnie Lane and many others during a series of concerts (The A.R.M.S. Tour) in 1983 which raised funds for multiple sclerosis research. The DVD includes film of all these events.

The film was shot on location in London, Wales, Texas, California, and Colorado, and features many of Lane's fellow musicians and friends including Pete Townshend, Eric Clapton, Kenney Jones, Ian McLagan, Glyn Johns and more. A staggering amount of rare live and television performances by Small Faces, The Faces, and various line-ups of Ronnie Lane & Slim Chance.

»The Passing Show: The LIfe & Music of Ronnie Lane« includes clips from:
April Fool, Debris, Whatcha Gonna Do About It?, Tin Soldier, Lazy Sunday, Itchycoo Park, Stay With Me, How Come, The Poacher, Tell Everyone, Annie, Kushty Rye, Ooh La La and many more...