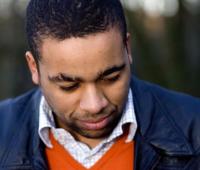 In Scandinavia, they’ve been calling Olav Larsen the “out of nowhere star” as if he were a super nova that had suddenly appeared in the heavens.

Overnight sensation is another way to describe the impact he has made with the release of a surprise debut CD that is the happiest bag of tricks discovered since the very first child’s hand was plunged into a stocking full of gifts on Christmas morning.

When LOVE’S COME TO TOWN was unveiled on his home turf - in Norway - it seemed as if it woke some reviewers from a deep slumber.

It earned more “wows” than any wonder of the world.

Olav’s got them all talking and in the buzz generated, he has been compared to everyone from Ray Davies and Mark Olson to Lloyd Cole and Arlo Guthrie.

He’s a quirky songster with a light, effervescent touch and a gift for subtle touches in the studio.

This is an album so pleasantly infectious that it transported me back to the time when Lindisfarne had the whole country singing along to songs like Lady Eleanor, Meet Me On The Corner and Fog On The Tyne.

Yes, it has all the sweet honeyed half-strained sound of Mark Olson.

But, it’s better than that as there are none of those messy patches that add unwelcome blots to the sun-baked Creekdipper landscape.

Instead, this is one of those rare happenings, an album that warms the cockles from uplifting start to fantastic, celebratory end.

The joyous opener, May The Sun Always Shine is a virtual prayer for mankind filled with the kind of simple, straightforward thinking that we all need to hear from time to time, carried off with St Thomas sincerity and a John Sebastian smile.

The Sweet Saviour’s Arms, bursting at the seams with gospel goodness, could have been lifted from any of the old Preservation Halls songbooks and comes complete with stirring marching band horns.

It’s the production, as much as anything that makes this such a richly appealing package. There are delicate touches from fiddle, harmonica, banjo, pedal steel, barrelhouse piano and dobro, all played to perfection and kept in check to provide comfortable, not lavish support.

Others have picked up on the fact that there is a terrific Kinks (circa ’66) feel to much of the material. It’s unmistakeable.

On Unhappy Dreamer feet firmly planted, he cautions us to be careful what we wish for - in case they come true.

The Arlo Guthrie influence is plain to see when the band bounces headlong into You Can Call Me Baby.

You’re The Only One is one of those songs that is so full of life it’s impossible to hear it out without breaking into a smile. It’s worth the money just to have the album for this tonic of a track alone, if only to get a chance to play and replay the wonderfully dirty guitar break hesitantly picked out by Erlend Asland. It’s one of those he’s-never-gonna-make-it deals that teases and tantalises, like watching someone crossing a river by stepping stone.

The more you play this the more you enjoy it until it becomes a best friend.

The more you listen, the more you find popping into your head as unlikely points of reference.

Ain’t Got Time is as good as anything you ever heard from Railroad Earth; Give Me Your Love is packed with all the emotion of Mike Scott when his big, loving heart is about to burst and We’ll Never Lose Our Minds, aided and abetted by the sympathetic backing vocals of Mariann Espedal is lifted (not for the first time) to McGarrigle greatness.

Did I say unlikely?

It may not have escaped your notice that Olav could be mistaken for a cousin of Jimmy Witherspoon and, growing up in the Norwegian port of Stavanger, he was introduced to his father’s collection of blues greats including Blind Willie McTell and Robert Johnson.

The young music lover fine-tuned his own tastes to include a healthy diet of Guy Clark, John Prine, Steve Goodman and Townes Van Zandt.

More recently, Bright Eyes and Howe Gelb have been stoking his fires.

I love this man; I love his music.

Watch him grow and grow.

It should be fifteen.