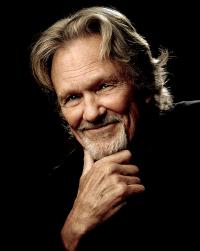 When Faith Hill and Willie Nelson induct Kris Kristofferson into the Country Music Hall of Fame, no doubt about it, they will honor one of the great minds of the 20th century. Nobody -- but nobody -- changed songwriting like Kris Kristofferson.

Before Kris, country songs suggested a little hand holding, a little kissing and a little smooching, but when Kris came on the scene with »Help Me Make It Through the Night,« he was writing lyrics like: »Take the ribbon from your hair/Shake it loose and let it fall/Laying soft against your skin/Like the shadows on the wall.« The man handled sex in such a tender manner, using such tender metaphors. Shoot, me and my sharecropping friends and kin had no idea he was talking about just sleeping together when he said, »All I'm taking is your time/Help me make it through the night.«

Referring to Kristofferson and his former wife, singer Rita Coolidge, »Kris'n'Rita« was spoken as one word on Music Row during the '70s. The crown prince of hillbilly songwriters had survived his habits, and in spite of himself, he had a record deal and was off and running with his band of merry music makers that included funky Donnie Fritts (also known as the »Alabama leaning man«) and his picking buddy, Billy Swan. Didn't somebody sing that in a song? Jerry Jeff Walker, I believe.

A Rhodes scholar with a master's degree in English, Kris would have made his Air Force major general daddy proud had he not started writing songs while at Oxford University in England. After college, he got married, joined the Army and was sent to Germany. He went to jump school, ranger school, flying school and became a pilot. During a two-week furlough in 1965, he buzzed Music City, but he became an English literature instructor at West Point. An Army buddy suggested he send some songs to his cousin, songwriter-publisher Marijohn Wilkin.

Kris left West Point and the Army, moved to Nashville and became the janitor at Columbia studios on Music Row while writing songs. His wife divorced him, and his dad disowned him. His initial songwriting career began in 1969 when Roy Drusky recorded »Jody and the Kid« and Roger Miller cut »Me and Bobby McGee,« »Darby's Castle« and »Casey's Last Ride.« Kris landed a helicopter in Johnny Cash's front yard and handed him a cassette, so the Man in Black eventually recorded »Sunday Morning Coming Down.« Waylon Jennings cut »The Taker,« and Ray Price recorded what turned out to be CMA's and ACM's song of the year in 1970 -- »For the Good Times.«

As an artist, Kris hit the pop charts with »Loving Her Was Easier (Than Anything I'll Ever Do Again)« and had his only No. 1 country chart topper with »Why Me« in 1973. Janis Joplin had a No. 1 pop hit with »Me and Bobby McGee,« and country diva Sammi Smith enjoyed her biggest hit with »Help Me Make It Through the Night,« earning Kris a Grammy for best country song in 1971. Kris was on a roll. He had hits in every musical genre -- from Gladys Knight to Bob Dylan, Jerry Lee Lewis to Ronnie Milsap and from Brenda Lee to John Hiatt. Willie recorded Willie Nelson Sings Kristofferson, an entire album of his songs.

Meantime, Kris made his acting debut in 1971 in Dennis Hopper's The Last Movie. Since that time, the singer-songwriter-actor has shared his talent in a plethora of films including my favorites, A Star Is Born with Barbra Streisand and Pat Garrett and Billy the Kid with James Coburn.

I actually bought a ticket to see Kris and Rita perform at Vanderbilt University in Nashville. The show was awesome. Kris sorta growled his songs, but he was Kris -- and that was OK. Even his drinking from a bottle of Jack Daniel's onstage seemed acceptable. Like I said before, he was Kris -- and it was OK. He was the hero of Music Row. He'd slept in cars, worked in bars, swept floors at CBS, wrote hits and was famous. His songs, like »Sunday Morning Coming Down« tell the story: »I woke up Sunday morning with no way to hold my head that didn't hurt/The beer I had for breakfast wasn't bad so I had one more for dessert/ I fumbled through my closet, through my clothes, and found my cleanest dirty shirt.« You English majors and mathematic majors: Read the man's lyrics. Study the alliteration, the inner rhyme and how it is all put together so skillfully and mathematically correct. Kris could very well have genius written beside his name.

But he boozed with the best, and he roared with the rest. In 1979, the Kris'n'Rita stories ceased around the time the couple divorced.

Luckily, Kris later met an attorney who now goes by the name of Lisa Kristofferson. The couple and their five kids all reside in Hawaii. (All five of the children have those Kris blue eyes that appear to look plumb through you.) According to Jessi (Mrs. Waylon Jennings) Colter, who said to me in Lisa's presence, »You know, Hazel, Lisa straightened out Kris' ass.« Kris is sober. I assume that's what Jessi was referring to. Lord knows, he'd needed straightening out for years.

Lord God, it's a miracle that Kris lived to make it into the Country Music Hall of Fame. I'm so glad Willie was part of the introduction, and I'm so thankful it will be televised for all to see during Tuesday night's (Nov. 9) CMA Awards show.

I'm sorry the other half of the great Highwaymen -- Waylon and Cash -- have left the building. I can still see Kris onstage with his three musical heroes, smiling like a kid in admiration as each one -- Willie, Waylon and Johnny, all song-stylists, all legends -- performed their part. God knows, the biggest fan in the room was Kris. He led the applause, clapped the hardest and the longest. It's enough to make you cry. 'Cause you know what? They ain't making 'em like these guys anymore.