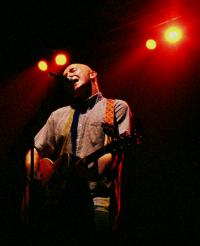 McLennan was one of Australia’s greatest songwriters who created an outstanding musical legacy as a founder member of The Go-Betweens and as a solo artist. He was enjoying enormous acclaim for the band’s most recent album »Oceans Apart«, which has received five star reviews around the world and won had a prestigious ARIA award.

McLennan was born in Rockhampton, Queensland on 12th February 1958. While attending university in Brisbane he met fellow student Robert Forster and together they formed The Go-Betweens. After releasing a string of singles the band recorded their debut album, »Send Me A Lullaby«, in 1981. The Go-Betweens recorded a series of exceptional albums that achieved widespread critical acclaim and were fundamental in bringing Australian music to a global audience. He was an unparalleled lyricist and a prolific and meticulous composer. His auto-biographical masterpiece »Cattle and Cane« was recently voted by the Australian Performing Rights Association as one of the ten greatest Australian songs of all time.

In 1989 The Go-Betweens took a ten year sabbatical and McLennan recorded four powerful solo albums including the vivacious debut »Watershed« and the epic »Horsebreaker Star« as well as forming satellite groups like Jack Frost with Steve Kilbey of The Church and The Far Out Corporation with Ian Haug of Powderfinger.

When Robert Forster and Grant McLennan reformed The Go-Betweens in 2000, the band was greeted with adulation by a new generation of musicians like Belle and Sebastian for whom, their songs had been an inspirational teenage soundtrack. The three albums the band subsequently released were universally acknowledged as containing some of McLennan’s greatest compositions.

McLennan was a passionate supporter of the arts, extremely well-read and maintained a keen interest in all contemporary music, cinema and visual art. He was an exceptionally charming and polite man who endeared himself to everyone who met him and was one of the rare individuals worthy of the epithet »larger than life«.

His singular contribution to music and his commitment to his craft simply cannot be understated. He will be deeply missed by all who knew him. He is survived by his mother, his sister, his brother, girlfriend Emma and lifetime musical colleague and friend Robert Forster.