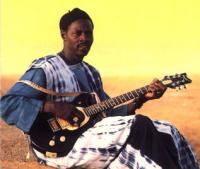 »One of Africa's best known musicians, Ali Farka Toure, has died after a long illness in his home country of Mali, the culture ministry has announced.

He was one of the pioneers of «Mali Blues» and his 1994 Talking Timbuktu album produced with US blues guitarist Ry Cooder was widely acclaimed.

Toure, who was in his late 60s, won two Grammy awards for his work.

He was also elected mayor of his home town of Niafunke on the shores of the River Niger in northern Mali.

Radio stations in the capital, Bamako, have interrupted their normal coverage and are playing his music.

He died in Bamako but is to be buried in Niafunke, 850km north of the capital on Wednesday, the authorities have announced.

Toure won Grammys for Talking Timbuktu and again this year, for his album in collaboration with another famous Malian musician, Toumani Diabate, In the Heart of the Moon.

His record label, World Circuit, said he had just finished work on a new solo album.

Although he has worked with several US blues guitarists, the «Bluesman of Africa» always insisted that the music had its roots in the traditional sounds of northern Mali, rather than the southern United States.

Many Bamako residents saw him as a northerner, rather than a national figure.

During the 1990s rebellion by the Tuareg people of northern Mali, Toure was seen as something of a peacemaker by singing in all of the region's languages - Songhai, Fulani and the Tuareg's Tamashek.

He was born in Timbuktu in 1939 but the exact date of his birth is not known.«