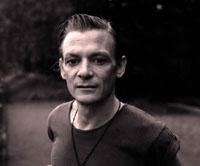 Singer-songwriter Chris Whitley, who emerged from
obscurity in 1991 with his debut album »Living with the Law,« has died of lung
cancer, his label said on Tuesday. He was 45.
Whitley was diagnosed with the disease just five weeks ago and died on Sunday
in Houston, said Brandon Kessler, owner of independent label Messenger
Records.
»You'd be hard-pressed to find a major musician who wasn't blown away by his
talents, his guitar-playing and his singing,« said Kessler, citing Bruce
Springsteen, Dave Matthews and Keith Richards as admirers.
With his high, lonesome voice and ghostly guitar, Whitley earned critical and
commercial success for the blues-drenched album, »Living with the Law.« The
title track was a minor hit, and Tom Petty and Bob Dylan hired him to open
their tours.
By then, the Houston native had spent more than a decade playing music,
starting out in New York when punk and New Wave were the dominant styles.
»I was definitely a sort of a misfit,« he told Rolling Stone magazine in
1991. »I mean, that was a funny time to be trying to get a gig at (punk club)
CBGB, playing a Dobro.«
At one point he moved to Belgium and much to his surprise, developed a strong
local following.
He got his big break from New Orleans-based producer Daniel Lanois, who
spread the word about his talents, resulting in nine labels vying to sign him.
Whitley chose Columbia, which released »Living with the Law,« its 1995 follow-up,
»Din of Ecstasy,« and 1997's »Terra Incognita.«
As his career progressed, Whitley ventured away from blues and toward more
mainstream rock.
»Every album he did was completely different from the one he did before,«
Kessler said.
After Columbia, he recorded for Dave Matthews' ATO label and for New
York-based Messenger, which released his last album, »Soft Dangerous Shores,« in July.
Whitley recorded a follow-up, »Reiter In,« which has not yet been released.
Whitley is survived by his 18-year-old daughter, Trixie, a brother, Dan, and
his father, Jerry.