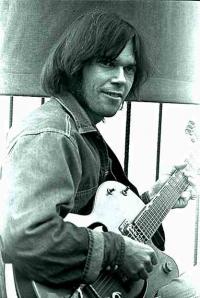 After nearly fifteen years of promises, Neil Young is now confident that a slew of material from his vaults will begin to see the light of day in 2006. With his latest album, Prairie Wind, out next week, the rock legend is planning several eight-disc sets packed with outtakes, home recordings, album tracks, live cuts and DVDs.

»It starts with my earliest recordings in 1963,« says Young. »Then several recordings with a group called the Squires, into the earliest
Buffalo Springfield stuff. Then there's a live record culled from a week's worth of performances at the Riverboat in Toronto.«

Fans can expect a 1970 show at Toronto's Massey Hall, featuring material from Harvest a year before its release, as well as Crazy Horse live at the Fillmore East. »It's got a sixteen-minute 'Cowgirl in the Sand,'« Young says of the Fillmore gig, »and a super-long 'Down by the River.'«

One live performance, the rock vet is convinced, trumps the original recording: the entirety of Tonight's the Night, recorded live at London's Rainbow Theatre. Says Young, »It's better than the record.«