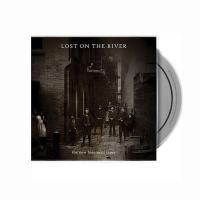 »Last autumn, I received a message from Bob Dylan’s publisher telling me that a box of lyrics had been found, all hand-written by Bob in 1967, during the time of the original Basement Tapes recordings. The question to me was, “Would you like to do something with these?” Shocked, I asked if Bob was into this, and having been told he was, I asked no more questions, but rather set out to come up with something that would do justice to Bob and be true to the spirit in which the lyrics were originally written. Bob had been collaborating with an extraordinarily talented group of musicians at the time, any of whom could have led their own bands. So, the first step was to find a group of song writers/band leaders who would be able to work together to write, sing, and perform melodies for these soulful and playful lyrics.

The artists we invited – Elvis Costello, Rhiannon Giddens, Taylor Goldsmith, Jim James and Marcus Mumford – were equal to the task. Not only do they have the talent and the same open and collaborative spirit needed for this to be good, they are all music archaeologists. They all know how to dig without breaking the thing they are digging. We sent sixteen lyrics to each artist ahead of time, and they all showed up at Capitol Studios in the basement of the Capitol Records building in Hollywood in March of this year. Some had written a melody or two, others had written a dozen, but a couple of days before the sessions started, an additional eight lyrics from that same period showed up. Those lyrics, which no one had time to think about, led to some of the freest recordings.

The first day, we recorded one song – the killer “Down On The Bottom,” led by Jim James and supported mightily by the others. At the end of that day, we started looking at the number of songs we had in front of us – there were going to be multiple versions of many of the songs – and we didn’t want to turn this into any sort of competition, so we decided to record everything.

What transpired during those two weeks was amazing for all of us. There was a deep well of generosity and support in the studio at all times, which reflected the tremendous trust and generosity shown by Bob in sharing these lyrics with us in the first place. More than 40 recordings were created, the first 20 of which will be released this fall on Lost On The River: The New Basement Tapes. Sam Jones captured all of it on film, and we’re creating a documentary that will give audiences an inside look at the making of this album and explore the historical context of Bob’s original Basement Tapes recordings and their enduring influence. We are all looking forward to sharing this project with you.