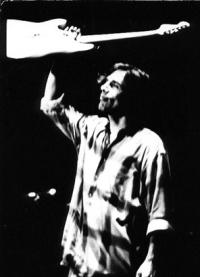 JACKSON BROWNE SOLO ACOUSTIC VOL. 1 is the first new release from the California based singer-songwriter since his induction into the Rock and Roll Hall of Fame in March 2004. It is also his first live collection since his 1977 multi-platinum album RUNNING ON EMPTY.

This new live acoustic album is simply stunning. It's unusual that a live album is able to capture the energy and vibrancy of a performance. Generally, a concert is one of those »you just had to be there« events.

JACKSON BROWNE SOLO ACOUSTIC VOL. 1 is one of those very rare albums that captures the vigor and magnetism of the live performance. The obvious connection between Jackson and his fans is left intact. The potency of his humor and talent shine through in a way that accurately captures his recent solo acoustic tours. The sound quality is excellent.

The album, produced by Jackson Browne and Paul Dieter, features live performances from Jackson's solo acoustic tours over the past couple of years. It starts off with a strong rendition of »The Barricades of Heaven« from his 1996 LOOKING EAST collection. In a stark acoustic rendition, this beautiful song -- with its reminiscing on where he came from -- establishes the album's tone and structure. We're on a journey of song and verse. The focus is on the song and the voice, harking
back to his singer-songwriter roots.

»The Barricades of Heaven« also showcases some very fine guitar work by Jackson, which is often overshadowed in concert by Browne's band performances where others often play lead guitar.

Jackson's early hits like »These Days,« »Fountain of Sorrow,« and »The Pretender« are all refreshing in their energy and passion. The brilliantly simple guitar and keyboard arrangements allow the listener to hear the words behind the songs and to rediscover the sheer magnitude of Browne's songwriting brilliance.

The album includes many of Jackson's best album cuts such as »Your Bright Baby Blues,« »For Everyman,« »Too Many Angels« and »Lives In The Balance,« the later of which is the first single to be released to radio stations. The CD also includes a beautiful rendition of »The Birds Of St. Marks,« a song Jackson wrote more than 30 years ago, but which has never appeared on any of his albums until now.

In the glitz and paparazzi of today's music scene, we sometimes lose sight of the fact that great music is based on great songwriting.

JACKSON BROWNE SOLO ACOUSTIC VOL. 1 should be required listening for songwriters who want to study the peak of their craft. Listen to the words of »For A Dancer« from 1974's classic LATE FOR THE SKY album as a fine example of what a song can and should be. No song has ever explored the mysteries of death in such a clear and profound manner.

If the warmth of Jackson's vocals doesn' t reach you, the lyrics certainly will. The album concludes with »Take It Easy«, a song Jackson co-wrote with Glenn Frey of the Eagles, who made it their first hit. Over the years, Jackson has fluctuated in concert between his own version and the better-known Eagles version. This one is a special version he shares with his fans, who can be heard singing along.

Jackson Browne's fans will undoubtedly offer up debate over the song selection and which of their favorite songs were not included. There will be little argument over the fact that this collection showcases his talents at the top of their form, providing a legacy worthy of his Hall of Fame induction, showcasing his songwriting talents as deserving of mention along side fellow inductees Bob Dylan, Van Morrison, Joni Mitchell, and Paul Simon.

Jackson is reportedly in the studio working on an album of new material for possible release next year. With the release of SOLO ACOUSTIC VOL. 1, his fans are sure to be looking ahead to Solo Acoustic Volume Two!

JACKSON BROWNE SOLO ACOUSTIC VOL. 1 will be released on October 11, 2005 by Jackson's own Inside Recordings label. You can pre-order the CD from his website at www.jacksonbrowne.com beginning September 1st.