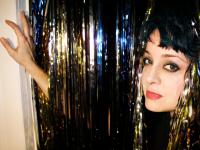 Kelly Hogan is one of the finest and most musically astute vocalists working in American popular music, but this seems to be better understood by her peers than the general public. Hogan cut a pair of fine albums for Bloodshot Records near the turn of the millennium, but they failed to find an audience, and she has since become best known for her fine work as Neko Case's backing vocalist, while she's performed with an array of artists from Tortoise, the Drive-By Truckers, and the Mekons to Amy Ray, Jakob Dylan, and Mavis Staples. Given her busy schedule working with others, it seemed an open question if Hogan would ever get around to making another record of her own, but I Like to Keep Myself in Pain not only puts her in the spotlight where she belongs, it's an instant classic that's as strong as any record that she's appeared on, no small achievement given her résumé. For I Like to Keep Myself in Pain, Hogan asked a number of her favorite songwriters to contribute tunes for the project, and they responded with some first-class material; »Ways of the World« by the late Vic Chesnutt is a Southern gothic that could have come from the pen of Bobbie Gentry; »We Can't Have Nice Things« by Jack Pendarvis & Andrew Bird is a pointed study of love and strife; »Daddy's Little Girl« by M. Ward is an epic-scale fantasy seen through the eyes of Frank Sinatra, and »Plant White Roses« is a marvelous countrypolitain weeper from Stephen Merritt. Hogan was also fortunate enough to recruit a superb studio band for these sessions, including legendary keyboardist Booker T. Jones, guitarist Scott Ligon (a frequent collaborator with Terry Adams and NRBQ), bassist Gabriel Roth (one of Sharon Jones' Dap-Kings), and drummer James Gadson (who has worked with everyone from Ray Charles to Paul McCartney), who navigate the music's stylistic shifts with imagination and a sure hand. But this album is truly Hogan's triumph; she has a marvelous voice, to be certain, but just as importantly, she possesses a rare gift for inhabiting the characters of these songs, and her performances here are both musically satisfying and emotionally compelling, finding the truth at the heart of each song and never letting it go. Hogan also works brilliantly with her accompanists, fitting artfully into the arrangements rather than riding herd over them. At a time when the ability to freakishly bend a note has become the standard by which many judge a vocalist, Hogan's style is refreshingly simple, honest, and strikes its target on every track; whether she's tackling country, pop, supper-club blues, or uptempo R&B, she can sing it right and make you a believer, and I Like to Keep Myself in Pain is the triumphant showcase her talent has deserved for far too long. ~ Mark Deming