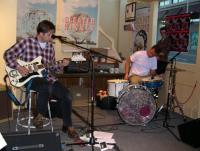 
Recorded in New Orleans, Joey Burns’ and John Convertino’s sixth album is arguably the most exciting and accessible CALEXICO record to date. It’s a fact emphasised by the band’s decision to name the album in tribute to the neighbourhood where they worked: Algiers.

The feel of ALGIERS is recognisably classic CALEXICO, but their style has been revitalised and reborn through the experience of recording in the magical city of New Orleans. Their work has spoken of dusty deserts and the loners that inhabit them, mixing America’s country music heritage with that of a Latin persuasion. In other words, it isn’t obviously affiliated with the sounds that have made New Orleans one of the premiere tourist destinations in the US. The choice of New Orleans was largely down to long time collaborator/producer Craig Schumacher. “We were talking about wanting to go to Europe and record,” Burns says, “but we never get our stuff together in time to make plans that far in advance. So where do you go that is nearby and has a European feel? New Orleans.”

You might think that after the 22 years since they first met, six studio albums and a suitcase of tour CDs, collaborations with the likes of Victoria Williams, Iron & Wine, Willie Nelson, Roger McGuinn and Nancy Sinatra, and soundtrack work to boot, there wasn’t much more they could achieve. But you’d be wrong. New Orleans clearly inspired them to make an album that sees them stretch out more effortlessly than ever before. Yes, you can take the men out of CALEXICO, but you can’t take CALEXICO out of the men…

To celebrate the release of ALGIERS, we’re offering a special treat for you. Not only are we premiering the first song off the record “PARA” as a free download but also a beautiful video of the same song, shot and directed by Zachary Spiger (who recently worked with LAMBCHOP on their GONE TOMORROW video). http://youtu.be/qM_Euc5saPI