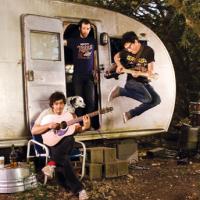 Between 2009’s acclaimed sophomore set Fits and this year’s, er, acclaimed D, Austin trio White Denim got thirty three per cent bigger, played plenty of shows and recorded another album. And then gave it away to anyone who cared to download it, financial appreciation welcomed.

Last Day of Summer is unique in the Texan explorers’ catalogue. Rather than the result of long experimentation and their usual casually eclectic approach (typified by their much admired mixtapes), enforced restrictions offered new possibilities. The last White Denim record made at drummer Josh Block’s home studio, it also marked second guitarist Austin Jenkins’s initiation as a full time member.

In singer/guitarist James Petralli’s words, “It represented a final opportunity to make a record in our own space on our own terms. We were also fully aware that because of typical recording industry practices, this record would have little to no chance of receiving a typical release. With that liberating truth in our minds, we resolved ourselves to completing Last Day of Summer in one month. After the completion of the record we all planned to go out and get day jobs, the band once again becoming a weekend project.”

As we now know, the reaction was so positive that generous supporters helped sustain the band. Since then the expansive D has become their most widely admired release. Petralli though has always described it as their fourth album, which must make Last Day the third.

It’s noticeably different in approach from their other offerings nonetheless. There are obvious highlights such as the chiming, always pushing ‘Home Together’, maybe the most original recasting of the Beach Boys’ sound that any American band has produced in years, Steve Terebecki’s bassline timeless yet very much his own. The soulful live fave ‘Tony Fatti’, the gently epic, almost bluesy ‘If You’re Changing’ and ‘Some Wild Going Outward’, a playful horse opera quietly reminiscent of the Byrds’ great ‘Chestnut Mare’, with its stinging guitar lines and galloping drums. Elsewhere elegant jazz-inflected instrumentals like ‘Incavaglia’ & ‘Light Light Light (featuring a great sax turn from Alex Coke), the closing vignette ‘Walk a Line’ and a reworking of ‘I’d Have It Just the Way We Were’ from Fits stand out. But the unifying theme is looseness, an aural snapshot of a band fully at ease. No wonder Petralli thinks it contains “some of our best performances and material.” And we haven’t even mentioned the R&B-flecked ‘Shy Billy...

As he says, “It effectively represents a band of reasonable adults dedicating themselves to a seemingly unreasonable cause. I think that we were able to make a fun and optimistic record in a personally difficult time. I listened to this record recently, and still love it. I’m thrilled that more people will get a chance to hear this music.”

The widely admired D is perhaps easier to ‘get’, but this is the collection that made it possible. It will be made available exclusively in the UK in a limited run including just 500 vinyl copies. This is the first time Last Day of Summer has appeared in physical format anywhere.