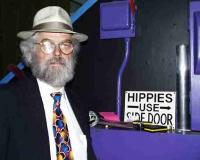 SAN FRANCISCO (AP) _ Chet Helms, the revered father of the 1967 Summer of
Love and a music promoter who launched the career of singer Janis Joplin, has died of complications from a stroke. He was 62.
Helms, who once stood at the center of the 1960s Bay Area music scene, died Saturday surrounded by friends and family at San Francisco's California Pacific Medical Center.
»It was a beautiful death,« said his wife Judy Davis. »It was a goodbye party. We all sang to him and told stories. He died as he lived - surrounded by love.«

Helms was the founder and manager of Big Brother and the Holding Company with Joplin as its lead singer. He was a rock-'n'-roll impresario who helped stage the free concerts and »Human Be-ins« at Golden Gate Park that became the backdrop for what became known as San Francisco's Summer of Love in 1967 at the height of anti-Vietnam War sentiment.
Helms was instrumental in helping to develop bands that delivered what became known as the San Francisco Sound.

Helms hooked Joplin up with Big Brother for jam sessions in a basement in the Haight Ashbury neighborhood. They debuted in June 1966 at the Avalon, officially launching the bluesy rock-'n'-roll diva's short career.
Helms eventually dropped out of the concert business for a time in 1970.

»Chet was a hippie,« said Mickey Hart, drummer for the Grateful Dead. »We were all hippies. He hated to charge for the music.«