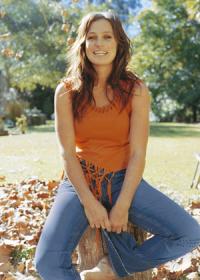 The new album is connected to the book 'A little Bird Told Me'. I’ve picked my fave songs from my fave singer/songwriters who have influenced and inspired me throughout my life – and written about within the book - and done my own versions of the songs. Some are brand new releases and some are old recordings from years ago, but all are special to me in one way or another. There are duets with some of my favourite artists as well.--KASEY CHAMBERS

Lucinda Williams ‘Happy Woman Blues’: ‘It was such a moment for me, first seeing Lucinda play when I was 16. She was one part of a three-woman bill the others were Mary Chapin Carpenter and Rosanne Cash. I didn’t know of Lucinda before this night, but she struck me as so real, so honest, that she’s been a huge influence ever since. Through Lucinda’s song I discovered that it was OK to sing about really personal things, stuff that touched you deeply. I thought it was really good to record an earlier song of hers, one that hasn’t been recorded by a lot of people, a song that I knew really well. We used to sing this in the Dead Ringers.’

Gram Parsons ‘Return Of The Grievous Angel’: My dad and I have always related to each other through the music of Gram Parsons. Back in the days of the Dead Ringers I wrote a song called ‘Just like yesterday (song for Gram)’, where I sang: ‘And thanks to you, my father understands me.’ And it’s true. Gram’s music is something I grew up with; it was all around me, all the time, ever since I was a baby. It reminds me of growing up, of childhood.’

Townes Van Zandt ‘If I Needed You’ with Jimmy Barnes: ‘It’s a Townes Van Zandt song, and he’s one of my all-time favourite songwriters — the version recorded by Emmylou Harris and Don Williams is my pick. Emmylou has been a huge influence on me for longer than I can remember. Jimmy Barnes is a friend, who was kind enough to sing with me on this track. Singing with Barnesy - who wouldn’t want to do that!!


Suzanne Vega ‘Luka’: ‘I’ve always wanted to record it; it’s always been on my mind since I first heard it in the 1980s. I’ve always been fascinated by its contrasts: Luka has this beautiful melody matched to a dark and very hard-hitting topic.

Steve Earle ‘Nothing But A Child’ with the Lost Dogs: Steve was one of the more obvious choices for this album; his music has had a massive impact on me for such a long time. I first met him at Byron Bay, prior to playing at Bluesfest. He walked into the room, this big bear of a man, and offered me some chicken chips. I hate chicken chips, but who refuses Steve Earle? Not me.’

John Prine ‘Leave The Lights On’: ‘When we started our covers act, the Lost Dogs, we named ourselves after a John Prine album, Lost dogs and Mixed Blessings his music means that much to me. He’s another huge influence and the one act I must see before I die. Hasn’t happened yet, but I’m determined that one day I’ll see John Prine play.’

Hank Williams ‘I’m So Lonesome I Could Cry’ with Paul Kelly: ‘I think it’s probably the best country song ever written; it epitomises everything that’s ‘real’ country to me. When I first met Paul, I asked him who his favourite songwriters were. He said, ‘Bob Dylan, Willie Nelson and Hank Williams.’ I was shocked; I had Paul pegged as sort of a rock guy. I was so wrong.’

Matthew Ryan ‘Guilty’: ‘When our family group the Dead Ringer Band went to America for the first time, I saw Matthew play, purely by chance, at this Nashville venue called the Exit / Inn. Who is this guy, I wondered when he sauntered out on stage, his guitar slung low, rock star style. Then he started to sing, in that gravelly growl of his, and I was blown away, totally addicted. Guilty is one of the many Matthew Ryan songs I fell in love with on that night.’

Gillian Welch ‘Orphan Girl’ with Shane Nicholson: Like Patty Griffin, Gillian Welch is more of a recent influence. I love the way she sounds, that mountain vibe; it transports me to such an authentic place. It’s timeless, not just old-timey. I’ve recorded this with Shane, who’s not only my husband but my preferred singing partner of anyone in the world.’

Cyndi Lauper ‘True Colours’: ‘As a kid, I loved the way Cyndi Lauper sang and the songs she picked; I was more interested in that than the whole ‘quirky Cyndi’ thing. When I was 9, I made my public debut, singing one of Cyndi Lauper’s songs. My friend Caddie and I stood there in this little club in Southend, as still as statues, our eyes closed tight throughout the entire experience.’

Fred Eaglesmith ‘Water In The Fuel’: ‘My brother Nash and I used to sing this on stage as a duet. It takes a lot to get Nash on stage but this song is just so powerful, who could resist? Fred’s music was a huge influence on Barricades & Brickwalls. My Dad, my best friend Worm and I used to drive around in this beaten-up van, the three of us up the front and the gear in the back, and Fred on the stereo all the time. Fred’s a lovely, smart guy as I’ve come to learn, a lot less country than you’d think.’

Nanci Griffith ‘Wish It Would Rain’ with Ashleigh Dallas: ‘The first time I heard this song was by the beautiful singer ‘Jann Browne’. This song has lived with me forever and I’ve never tired of it. I’m singing it here with Ashleigh Dallas, an incredible young talent who’s been playing fiddle and singing in my band.

Paul Kelly ‘Everything’s Turning To White’: ‘If I could swap my career for that of one other person, it would be Paul Kelly. What’s not to love? Everyone knows his music and his songs, yet he’s not fussed over like some celebrity. I once did a duet with him at the Metro in Sydney and when he walked on the stage, the crowd’s response was so intense it was as though the roof was lifted off the place. Amazing. This my favourite Paul Kelly song — I’m totally convinced he becomes an old woman when he sings it.’

James McMurtry ‘Too Long In The Wasteland’: ‘I was appearing on an American radio program called Mountain Stage and James McMurtry was also on the bill. Both Nash and I were huge fans of this song and the album it came from, also called Too Long in the Wasteland. I’d just recorded a version of it, and had it with me. I went up to him backstage, introduced myself and said, ‘Mr McMurtry, I’ve just recorded a version of your song. I’m a huge fan.’ I handed him a copy. He looked at me and said, ‘Yeah, I’ve heard about that’ — and then he walked away! Not so impressed. Sometimes it’s best not to meet your heroes.’

Patty Griffin ‘Top Of The World’: ‘I was very pregnant with my second child, Arlo; at the time I was singing with our covers band called the Lost Dogs. I was running overdue with Arlo and got it into my head that if I sang this song, at the top of my lungs, maybe it would bring on the baby. As great as this song is, my plan didn’t work; it was a few more weeks before Arlo Ray was born. In a hospital, thankfully, not on stage.’