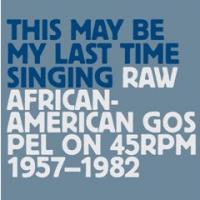 Get ready for fiery sanctified soul, heavy Pentecostal jams, drum machine gospel, slow-burning moaners, glorified guitar sermons and righteously ragged a cappela hymns! The music on this compilation was originally released on small label 45s, mostly in the 1960s and '70s. At least one-third of the records were self-released, paid for by a church congregation or the artists themselves. Others were on regional labels (typically run by one single producer) little known today outside of a small circle of collectors. This vibrant music is incredibly honest and almost criminally unknown.

All tracks were sourced from 45s collected over the last decade by compiler Mike McGonigal, who also produced 2009's three disc set Fire in My Bones: Raw + Rare + Otherworldly African-American Gospel (1944-2007) for Tompkins Square. McGonigal, who has compiled records for Mississippi Records and his own Social Music label, lives in Portland, OR where he is the editorial director for Yeti Publications. He writes in the liner notes that he »chose to source this compilation entirely from 45s because of their democratic/DIY nature; almost anyone could raise enough money to release a seven-inch single.«

»Maybe you'll feel like I did on first hearing these tracks, that you've stumbled in on someone else's tenderly private moment. Or that you've been swept up in a collective delirium. You'll hear deep soulfulness here, with heavy admixtures of rhythm and blues and rock'n'roll. There are echoes of '60s and '70s pop too. You'll also catch bits of country and western, and something like surf guitar. In another way, much here uncannily resembles the unruly sound and spirit of 1960s garage. Give yourself over to this compilation: there's delight and surprise in every track.«

-PETER DOYLE, author of Echo and Reverb: Fabricating Space in Popular Music Recording, 1900-1960; The Devil's Jump and Crooks Like Us