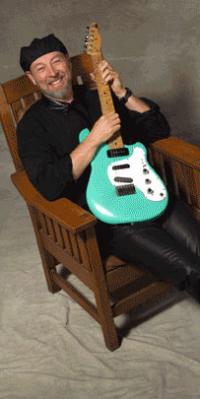 Spanning Thompson’s solo years from his first John Peel Session (with Linda Thompson) in January 1973 through to a Hub Session for Six Music in 2009, ‘Live At The BBC‘ features an entire disc of sessions and concerts from Richard and Linda Thompson, including an In Concert performance with a full band recorded just after the release of the couple’s classic 1982 album ‘Shoot Out The Lights‘.

The remaining audio discs feature Thompson solo or with a series of great Richard Thompson Bands, drawing from all Thompson’s Island, Polydor, Chrysalis and Hannibal albums in the 70s and 80s, plus Thompson’s independent releases since 2001 from ‘The Old Kit Bag‘ to 2009&#8242;s ‘Sweet Warrior‘.

There are four otherwise unreleased songs written by Richard Thompson in this set: ’Dragging The River‘, 1973, ‘Modern Woman‘, 1982, ‘Kidzz‘, 2003 and ‘Time’s Gonna Break You‘, 2009. There are also several traditional songs Thompson has not recorded elsewhere, including ‘William Brown’ and ‘A Hunting The Wren’ which Thompson performed for Bob Harris in 2008 as part of his chronological music history lesson, 1000 Years Of Popular Music.

The DVD Disc features superb performances from the 70s and 80s, all unseen since they were broadcast aside from one clip of Richard & Linda performing ‘A Heart Needs A Home’ on the Old Grey Whistle Test in 1975. The couple are also captured on the Jake Thackray Show and in concert for BBC Bristol’s A Little Night Music, both from 1981. A solo clip of Thompson’s ’She Twists The Knife Again’ from the Whistle Test in 1985 and a Richard Thompson Band show recorded at Barrymore’s Club, Ottowa the same year, complete the DVD disc.