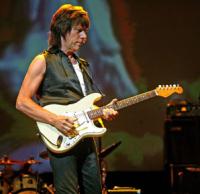 
Jeff Beck paid fitting Tribute to Les Paul last summer, celebrating what would have been the pioneering guitarist’s 95th birthday by playing his friend and mentor’s music, along with classic tunes from the era, in the same Times Square nightclub that Paul played every Monday for 14 years before his death in August 2009.

Sponsored by Gibson Guitar and billed as “A Celebration of Les Paul,” Beck was joined by The Imelda May Band at the Iridium Jazz Club in June 2010. Other guest performers joining Beck onstage included Brian Setzer, Gary “U.S.” Bonds, and Trombone Shorty.

Jeff Beck is true rock legend, described as »the first of the great guitar showmen«. From his time with the Yardbirds in the sixties, through the Jeff Beck Group and throughout his solo career his unique guitar style and constant desire to explore new musical areas and sounds has won him the admiration of his peers and the adoration of legions of fans.