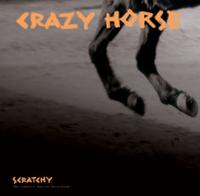 The history of Crazy Horse begins in 1962, when vocal group fans Billy Talbot and Danny Whitten met in Los Angeles. They soon added singers Ralph Molina and Ben “Dino” Rocco and became Danny & The Memories, landing a deal with Valiant Records. After moving to San Francisco and re-christening themselves the Psyrcle, Whitten, Talbot, and Molina discovered The Byrds and returned south to form a guitar-driven rock band. With the addition of George and Leon Whitsell (guitars) and Bobby Notkoff (violin), the quintet became The Rockets. Neil Young soon became a fan and in 1969 asked Whitten, Talbot, and Molina to be his backing band. Their new name, Crazy Horse, first appeared on Young’s groundbreaking album from that year, Everybody Knows This Is Nowhere.

For their solo debut, Crazy Horse wanted to sand down some of the rough edges that characterized their work with Young. “With Neil, our sound is very rustic,” says Talbot in the liner notes to this release. “It’s thrown up like a log cabin that still has bark on it, and that’s great. But Danny and Ralph and I had our own thing, and it wasn’t exactly the way we were with Neil. It wasn’t just three-chords, bashing-away Crazy Horse.” With producer-keyboardist Jack Nitzsche and singer-guitarist Nils Lofgren added to the mix, the 1971 album offered a tough, soulful alternative to the sometimes-enervating brand of country-rock heard on radio at the dawn of the decade.

Crazy Horse, though critically celebrated to this day, wasn’t much of a commercial success. Whitten’s heroin addiction forced him to leave the band shortly after the release of the record (his overdose death in late 1972 set the tone for Neil Young’s ragged masterpiece Tonight’s The Night, recorded in 1973 and released two years later). George Whitsell from The Rockets, along with singer-guitarist Greg Leroy and singer-keyboardist John Blanton joined, and the new lineup cut the country-leaning follow-up, 1972’s Loose, with engineer Fred Catero. Yet another lineup recorded 1973’s At Crooked Lake for Epic.

Disc one of this two-CD Rhino Handmade collection contains remastered versions of Crazy Horse and Loose in their entirety. Disc two includes previously unreleased tracks from the Crazy Horse sessions, as well as a previously unreleased version of Neil Young’s “When You Dance You Can Really Love,” a 1971 radio spot, and the A- and B-sides of the Danny & The Memories single “Can’t Help Loving That Girl,” released in 1962 on the Valiant label.