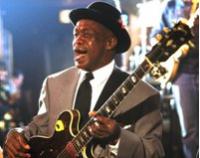 Chicago blues guitarist and vocalist Albert Abraham »Little Smokey« Smothers, 71, died on November 20, 2010. Smothers recorded multiple albums and accompanied other famed blues men and women on records and in live performance. He was also known as a mentor to younger musicians, including Paul Butterfield and Elvin Bishop of the popular and influential 1960s blues crossover group The Paul Butterfield Blues Band. Smothers died at Little Company of Mary Hospital in Chicago of natural causes.

Smothers was born into a musical family in Tchula, Mississippi on January 2, 1939 and moved to Chicago as a teenager. His older brother, guitarist Otis »Big Smokey« Smothers became a well-known Chicago blues artist. Little Smokey took up guitar and before long was recording and performing with artists like Howlin' Wolf, Little Walter, his soul singer cousin Lee »Shot« Williams and others. Little Smokey developed a smooth, jazzy, contemporary blues style, with heavy influences from B.B. and Albert King and Kenny Burrell. Concentrating primarily on his instrumental skills, he toured and led bands playing locally in Chicago's South Side blues clubs beginning in the late 1950s and throughout the 1960s. He partially retired to raise a family, but returned to blues in 1978. He spent most of the 1980s playing small Chicago clubs and touring occasionally as a sideman, including as lead guitarist with the Legendary Blues Band.

Smothers made his debut recordings as part of Mojo Buford's WINDY CITY BLUES SUMMIT album. During his tenure with the Legendary Blues Band, he was featured on their album WOKE UP WITH THE BLUES. Smothers recorded his first CD as a bandleader in 1993 with the award-winning Dutch Black Magic label release BOSSMAN!. In 1996 he recorded SECOND TIME AROUND for the German CrossCut label; the title track was a chronicle of his then-recent emergency coronary bypass surgery. He was co-billed with his protege Elvin Bishop for his American album debut, THAT'S MY PARTNER! on Alligator Records, recorded live in San Francisco. In 2009 Bishop facilitated CHICAGO BLUES BUDDIES, a collection of their musical collaborations which also received uniformly warm reviews and provided financial and spiritual support for Smothers as his quality of life declined.

In addition to his recording and performing career, Smothers was a featured artist in Martin Scorsese's 1993 public television series, The Blues, with a lengthy live performance sequence filmed at blues singer Koko Taylor's night club.

Smothers' relationship with The Paul Butterfield Blues Band began in the early 1960s when he first saw Butterfield playing harmonica on the sidewalk in Chicago's Hyde Park neighborhood. He soon incorporated Butterfield into his South Side revue which also included Lee »Shot« Williams and an impressive horn section including another Smothers protege, baritone sax player Willie Henderson, who went on to become a well-known R&B horn arranger. In 1964 Smothers accompanied Butterfield on some recordings for Swedish Radio. At the Blue Flame club on 39th Street, Smothers met Elvin Bishop, an aspiring blues guitarist and a University Of Chicago scholarship student. Smothers took Bishop under his wing and taught him blues guitar fundamentals. Bishop still remembers Smothers' motivational tactics with fondness: »He'd take me over and have them neck bones and beans goin' on the stove, and he said, 'Come here.' He'd lift up that lid and say, 'Smell this!' and I'd say, 'Oh, that smells good!' And he'd say, 'When you get this part, you can have some.'« Bishop became a core member of The Paul Butterfield Blues Band, which broke the blues through to a much wider audience outside the black community and was involved in pivotal blues landmarks including Bob Dylan's legendary and controversial amplified band performances at the Newport Folk Festival.

Along with the musical legacy of his own recordings and the noteworthy musicians he helped at a critical time, Smothers is well remembered for a quick wit, smile and laugh; a healthy quotient of humor in the delivery is one of his main influences on Bishop. Recalling his friendly, outgoing nature, Bishop commented, »He would've gotten along with Martians.«