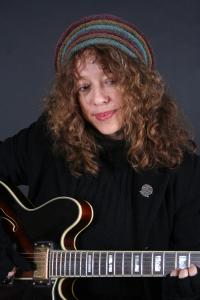 I really don’t want this to sound depressing, but we weren’t quite sure Jenny was going to make this concert. She was planning the CD release party for her solo recording “Coming Home” from the bed of a hospice where doctors predicted she only had only 3 to 6 months left from pancreatic cancer.

She wanted to meet with me to discuss and make sure there was music being created from her friends at this event because even if she did make it, she surely wouldn’t be strong enough to perform her songs, which she worked so hard on to perfect for the CD. She was too thin, weak and could barely get out of bed.

There was just a little more than a month before the show and I sort of told her a lie to give her something to hold on to, or maybe to give myself something, or both.

I told her; “Jenny, not only will you make it to your CD release party, but you’re gonna out-play everyone there!” Well, long story short, she immediately started a steady diet of the Buddhist chant Nam-Myoho-Renge-Kyo, homeopathic remedies and strong focus in the days to follow and I watched her transform herself into a determined little beast! She was still weak, but out of bed and then out of the hospice, planning, playing, rehearsing.

The night of this concert which you are about to listen to, it was a full house at the famous Mosebacke in Stockholm. Friends, family and fans of Jenny’s crowded the room, but you could still sense the common sadness that this person who we all loved so dearly was stricken with cancer. Then Jenny took to the stage and all that sadness melted away like dewdrops in the morning sun.

This live recording is a document and testament of Jenny’s strength and tremendous talent from that night. It was more than just a show, it was a victory in the face of tragedy and every soul in the house that night watched in delight as Jenny «out-played everyone.”

I write this nine months later from a hotel room in Åmål where I performed two days alongside Jenny for the Åmål Blues Festival where she received thunderous applause and a standing ovation.