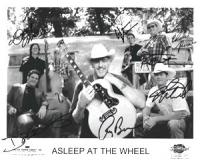 It's a match made in Western Swing heaven as Ray Benson & Asleep at the Wheel team up with famed Texas Playboy Leon Rausch for their first-ever recording together. Rausch first joined Bob Wills and his Texas Playboys in 1958, was featured in the historic 1973 recording session with Wills called 'For the Last Time' and has gone on to lead bands such as 'Bob Wills' Original Texas Playboys' and 'The Playboys II.' At age 83, Rausch is one of the few Texas Playboys still performing. Asleep at the Wheel have been called 'the post-modern kings of Western Swing,' forming in 1970 in Paw Paw, West Virginia and eventually settling in Austin, TX in 1973. Celebrating forty years of continuous touring and recording, Ray Benson and his ensemble (over 100 former members and counting) have received nine GRAMMY (R) Awards and extended the legacy and vitality of a music first popularized by Bob Wills and his Texas Playboys.