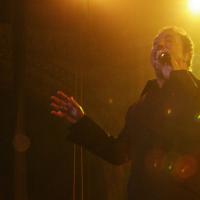 
»We wanted to go back to basics, go back to the source, it was just me singing live with a rhythm section - no overdubbing, no gimmicks, no complicated horn and string arrangements, just get the song down in an entire take, capture the meaning of the song, its spirituality, its life, and capture that moment, right there. And I think that's what we've done,« says Tom Jones, the veteran singer from Wales, who turns 70 this year and who has just completed `Praise and Blame', his follow up to 2008's acclaimed `24 Hours' and quite simply his finest work to date.

It is a truly remarkable record, one that captures the Tom Jones who listened to Mahalia Jackson and Sister Rosetta Tharpe on the radio as a child growing up, who thought gospel music was »just like rock'n'roll, every bit as exciting but with deeper lyrics«, the Tom Jones who belted out The Lord's Prayer as a jubilatory spiritual in school assembly, »because that was the only way I knew how to sing it, it was natural for me.«

This is Tom Jones going back to his roots on an album of gospel, blues, traditional and country songs, wearing his heart on his sleeve, emotionally raw and true.

Recording with producer Ethan Johns (Kings Of Leon, Ray LaMontagne, Paolo Nutini, Laura Marling) at Peter Gabriel's Real World Studios in the little village of Box in Wiltshire, coaxed the most exhilarating performances out of the singer.

With musicians including steel guitarist BJ Cole, keyboardist Booker T Jones (of Memphis soul legends Booker T and the MGs), Hammond organist Chris Holland and background vocalists Gillian Welch, Alison Pierce, Dave Rawlings and Orin Waters at hand, Tom has quite simply delivered his tour de force. It's him bearing his soul, singing from the heart, telling it like it is.