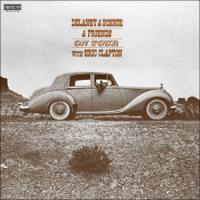 "Delaney and Bonnie Bramlett assembled an all-star group of “friends” in 1969 for a weeklong tour of England, a legendary excursion that would produce On Tour With Eric Clapton, one of rock’s most powerful and enduring live albums. Clocking in at a mere 40 minutes, the original left fans wanting more for decades. THE WAIT IS OVER - Rhino Handmade delivers with a four-disc deluxe reissue expanded with more than three hours of unreleased roof-raising, hickory-smoked rock ’n’ soul.

The set, which comes packaged in a mock road case, contains Delaney & Bonnie & Friends’ complete performance at London’s Royal Albert Hall, plus a composite of the next night’s performances at Colston Hall in Bristol, and both the early and late shows from the tour’s final stop at Fairfield Halls in Croydon. Along with the Bramletts, the touring band showcased on these discs includes guitarists Eric Clapton and Dave Mason, bassist Carl Radle, drummer Jim Gordon, organist Bobby Whitlock, Jim Price and Bobby Keys on horns, percussionist Tex Johnson, and singer Rita Coolidge. The Croydon shows also features Mysterioso (aka George Harrison), who can be heard playing bottleneck slide, a technique Harrison reportedly learned from Delaney during this tour.

Along with unreleased versions of all the songs from the original, this reissue also contains several songs not featured on the 1970 album, including “I Don’t Know Why” a track the Bramletts penned with Clapton; “My Baby Specializes” and “Everybody Loves A Winner” from the Bramlett’s debut Home; “Get Ourselves Together” from the couple’s 1969 follow-up Accept No Substitute; the traditional “Will The Circle Be Unbroken”; a cover of Spencer Davis Group’s “Gimme Some Lovin’”; and the instrumental “Pigmy.”

Glyn Johns, who recorded the Colston Hall gig, revisits his experience in the collection’s detailed liner notes: “There is no question that they had an immense effect on popular music, mostly by influencing some of the most successful musicians of the day. The outstanding memory for me is the sound they created. Being an engineer, it had a huge influence on me—this, coupled with the complexity of the rhythm section and the ease with which they performed. Us Brits had never heard anything so fluid.”-Read Less