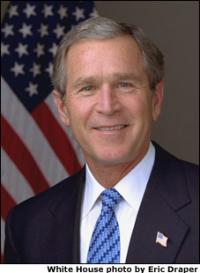 Tunes for the Freewheelin' George Bush
By ELISABETH BUMILLER

Between his return on Friday from Pope John Paul II's funeral in Rome and his meeting today with Prime Minister Ariel Sharon of Israel, President Bush spent an hour and a half on Saturday on an 18-mile mountain bike ride at his Texas ranch. With him, as usual, was his indispensable new exercise toy: an iPod music player loaded with country and popular rock tunes aimed at getting the presidential heart rate up to a chest-pounding 170 beats per minute.

Which brings up the inevitable question. What, exactly, is on the First iPod? In an era of celebrity playlists - Tom Brady, the New England Patriots quarterback, recently posted his on the iTunes online music store - what does the presidential selection of downloaded songs tell us about Mr. Bush?

First, Mr. Bush's iPod is heavy on traditional country singers like George Jones, Alan Jackson and Kenny Chesney. He has selections by Van Morrison, whose »Brown Eyed Girl« is a Bush favorite, and by John Fogerty, most predictably »Centerfield,« which was played at Texas Rangers games when Mr. Bush was an owner and is still played at ballparks all over America. (»Oh, put me in coach, I'm ready to play today.«)

The president also has an eclectic mix of songs downloaded into his iPod from Mark McKinnon, a biking buddy and his chief media strategist during the 2004 campaign. Among them are »Circle Back« by John Hiatt, »(You're So Square) Baby, I Don't Care« by Joni Mitchell and »My Sharona,« the 1979 song by the Knack that Joe Levy, a deputy managing editor at Rolling Stone in charge of music coverage, cheerfully branded »suggestive if not outright filthy« in an interview last week.

Mr. Bush has had his Apple iPod since July, when he received it from his twin daughters as a birthday gift. He has some 250 songs on it, a paltry number compared to the 10,000 selections it can hold. Mr. Bush, as leader of the free world, does not take the time to download the music himself; that task falls to his personal aide, Blake Gottesman, who buys individual songs and albums, including Mr. Jones's and Mr. Jackson's greatest hits, from the iTunes music store.

Mr. Bush uses his iPod chiefly during bike workouts to help him pump up his heartbeat, which he monitors with a wrist strap. The strap also keeps track of calories expended for the intensely weight-focused president, who has recently lost eight pounds after eating a lot of doughnuts during the 2004 campaign. Mr. Bush burned 1,300 calories on his bike ride on Saturday, Mr. McKinnon reported.

As for an analysis of Mr. Bush's playlist, Mr. Levy of Rolling Stone started out with this: »One thing that's interesting is that the president likes artists who don't like him.«

Mr. Levy was referring to Mr. Fogerty, who was part of the anti-Bush »Vote for Change« concert tour across the United States last fall. Mr. McKinnon, who once wrote songs for Kris Kristofferson's music publishing company, responded in an e-mail message that »if any president limited his music selection to pro-establishment musicians, it would be a pretty slim collection.«

Nonetheless, Mr. McKinnon said that Mr. Bush had not gone so far as to include on his playlist »Fortunate Son,« the angry anti-Vietnam war song about who has to go to war that Mr. Fogerty sang when he was with Creedence Clearwater Revival. (»I ain't no senator's son ... Some folks are born silver spoon in hand.«) As the son of a two-term congressman and a United States Senate candidate, Mr. Bush won a coveted spot with the Texas Air National Guard to avoid combat in Vietnam.

Meanwhile, Mr. Levy sized up the rest of the playlist of the 58-year-old president. »What we're talking about is a lot of great artists from the 60's and 70's and more modern artists who sound like great artists from the 60's and 70's,« he said. »This is basically boomer rock 'n' roll and more recent music out of Nashville made for boomers. It's safe, it's reliable, it's loving. What I mean to say is, it's feel-good music. The Sex Pistols it's not.«

Mr. Jones, Mr. Levy said, was nonetheless an interesting choice. »George Jones is the greatest living singer in country music and a recovering alcoholic who often sings about heartbreak and drinking,« he said. »It tells you that the president knows a thing or two about country music and is serious about his love of country music.«

The songs by Mr. Jackson indicate that the president »has a little bit of a taste for hard core and honky-tonk,« Mr. Levy said, adding that both Mr. Jackson and Mr. Jones »are not about cute and pop, and they're not getting by on their looks.« And while Mr. Chesney »is about cute and pop and gets by on his looks,« Mr. Levy said, »he's also all about serious country music.«

Mr. McKinnon, who has downloaded »Castanets« by Alejandro Escovedo and »Alive 'N' Kickin' « by Kenny Loggins into Mr. Bush's iPod, said that sometimes a presidential playlist is just a playlist, nothing more.

»No one should psychoanalyze the song selection,« Mr. McKinnon said. »It's music to get over the next hill.«