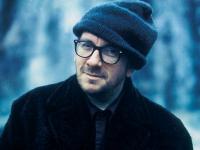 The record was produced by T Bone Burnett and recorded by Mike Piersante during a three-day session at Nashville's Sound Emporium Studio.

Several of these songs, including »Down Among The Wines and Spirits«, were given their first public performances during Costello's acclaimed solo appearances as part of »The Bob Dylan Show« in late 2007.

The album title makes reference to »The Secret Songs«, Costello's unfinished commission for the Royal Danish Opera about the life of Hans Christian Andersen.

Seeking a new connection from the author to the Anglophone world, Costello wrote about the Andersen's relationship with the world famous singer, Jenny Lind in »She Handed Me A Mirror« and »How Deep Is The Red«.

»She Was No Good«, relates some of the chaotic details of Lind's famous »All-American« concert tour of 1850, which was promoted by P.T. Barnum. In its aftermath, »Red Cotton« imagines Barnum reading an Abolishionist pamphlet, while manufacturing cheap souvenirs of the adventure.

These four episodes were newly adapted for the instrumentation of this record.

Indeed these are first Costello compositions to be predominantly rooted in acoustic music since his 1986 album, »King Of America«, which was produced by T Bone Burnett. He also produced the 1989 album, »Spike«.

T Bone adds his distinctive Kay electric guitar to several of numbers, the only amplified instrument on the recording.

Jim Lauderdale takes the close vocal harmony part throughout the record and Emmylou Harris contributed a third vocal part on the chorus of »The Crooked Line« on the final day of recording.

The record concludes with the waltz, »Changing Partners«, a song made famous by Bing Crosby.

The cover artwork of »Secret, Profane & Sugarcane« is an ink drawing by the renowned cartoonist, illustrator and author, Tony Millionaire.

Elvis Costello first recorded in Nashville with George Jones in 1979 and returned to the city for »Almost Blue«, his 1981 album of classic country covers.

He returned to the city in 2004 to record a duet rendition of »The Scarlet Tide« with Emmylou Harris.

This song, co-written with T Bone Burnett, received an Academy Award nomination for Alison Krauss' rendition in the motion picture, »Cold Mountain« in 2003.

Select US tour dates featuring musicians from the album -- dubbed «The Sugarcanes» -- will follow in June and August, 2009.

Due to the division of the music over four sides, the vinyl edition will contain two additional tracks, a arrangement of Lou Reed's «Femme Fatale» and Costello's sequel to the old Appalachian murder ballad, «Omie Wise», entitled, «What Lewis Did Last".