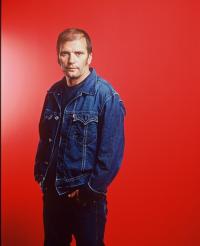 »Townes Van Zandt is the best songwriter in the whole world and I'll stand on Bob Dylan's coffee table in my cowboy boots and say that.« - Steve Earle (1995)

March 9, 2009 - Los Angeles, CA -- Steve Earle is set to release Townes, his highly anticipated follow up to the Grammy Award winning album Washington Square Serenade, on May 12th via New West Records. The 15-song set is comprised of songs written by Earle's friend and mentor, the late singer-songwriter, Townes Van Zandt. Townes will also be available as a deluxe two-CD set, as well as double Limited Edition 180 gram vinyl.

The album was produced by Earle at his home in Greenwich Village, at Sound Emporium and Room and Board in Nashville, TN and The Nest in Hollywood, CA. The track »Lungs,« was produced and mixed by the Dust Brothers' John King and features Tom Morello of Rage Against the Machine/The Nightwatchman/Street Sweeper on electric guitar. Earle's wife, the acclaimed singer-songwriter Allison Moorer, is featured on backing vocals on »Loretta« and »To Live Is To Fly.« Three songs cut in Nashville, »White Freightliner Blues,« »Delta Momma Blues,« and »Don't Take It To o Bad« feature a bluegrass band consisting of Dennis Crouch, Tim O'Brien, Darrell Scott and Shad Cobb.

Earle met Townes Van Zandt in 1972 at one of Earle's performances at The Old Quarter in Houston, TX. Van Zandt was in the audience and playfully heckled Earle throughout the performance to play the song »Wabash Cannonball.« Earle admitted that he didn't know how to play the tune and Van Zandt replied incredibly, »You call yourself a folksinger and you don't know 'Wabash Cannonball?'« Earle then silenced him by playing the Van Zandt song »Mr. Mudd & Mr. Gold,« not an easy feat due to its quickly-paced mouthful of lyrics squeezed into just over two minutes of song. Their bond was immediately formed. On Townes, Earle and his son, singer-songwriter Justin Townes Earle (named after Van Zandt), trade verses on the tune, a song the two of them have been playing together since Justin was a teenager.

The songs selected for Townes were the ones that meant the most to Earle and the ones he personally connected to (not including selections featured on previous Earle albums). Some of the selections chosen were songs that Earle has played his entire career (»Pancho & Lefty,« »Lungs,« »White Freightliner Blues«) and others he had to learn specifically for recording. He learned the song »(Quicksilver Daydreams Of) Maria« directly from Van Zandt, and taught himself »Marie« and »Rake« specifically for the album's recording. Once a song he played during his live show, Earle relearned »Colorado Girl« in the original Open D tuning that Van Zandt played it in. Earle recorded the New York sessions solo and then added the other instruments later on in order to preserve the spirit of Van Zandt's original solo performances to the best of his recollection.

When speaking about Townes, Earle stated, »This may be one of the best records I've ever made. That hurts a singer-songwriter's feelings. Then again, it's some consolation that I cherry picked through the career of one of the best songwriters that ever lived.«

Townes Van Zandt's debut album, For The Sake Of The Song, was released in 1968. His last, No Deeper Blue, appeared in 1995. His life and songs are the subject of the critically acclaimed 2006 documentary film, Be Here To Love Me. Van Zandt died in 1997 at the age of 52.

While being a protégé of Van Zandt, Earle is a master storyteller in his own right, with his songs being recorded by Johnny Cash, Willie Nelson, Emmylou Harris, Waylon Jennings, Travis Tritt, The Pretenders, Joan Baez and countless others. 1986 saw the release of his debut record, Guitar Town, which shot to number one on the country charts and immediately established the term »New Country.« What followed was an extremely exciting array of twelve releases including the biting hard rock of Copperhead Road (1988), the minimalist beauty of Train A Comin' (1995), the politically charged masterpiece Jerusalem (2002) and the Grammy Award winning albums The Revolution Starts...Now (2004) and Washington Square Serenade (2007). Earle also produced the Grammy nominated album, Day After Tomorrow, by the legendary Joan Baez in 2008.

Steve Earle will be touring in support of Townes with tour dates announced shortly.
>>