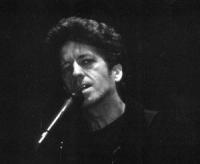 »When I think about this collection,« Nile says, »the songs strike me as reflections of a traveler on a journey, things I've seen, heard and felt along the way. The musicians on the album played their hearts out and I think you can hear that in the recordings. I'm lucky to be able to draw on such talented people to help bring the songs to life.«

The album, titled House of 1,000 Guitars is due online and in stores April 14. In the meantime, Nile is on tour in Spain before returning to the States for South by Southwest. For a full list of tour dates and other information, visit WillieNile.com.