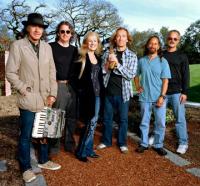 Moonalice is a Native American tribe that dates back to the beginning of time. According to Moonalice legend, the tribe descends from Piltdown Woman, or possibly from a couple of naked, snake-charmed gardeners who liked to hang around with friendly dinosaurs. In later times, the tribe evolved into two major clans. One was agricultural, the other nomadic. The farmers were known as hippies. They cultivated many things, but their specialty was a native American crop: hemp. Over the years, the hippies found many uses for hemp and built an advanced culture around it.
The nomadic Moonalice clans were known as bands. They wandered the continent, surviving on their wits and music. Their specialty was low tones. The clans coexisted for millennia, living in harmony (and counterpoint) with all creatures.

From time to time, the Moonalice hippies and bands would gather in pow wows that were known as gigs. A precursor to modern county fairs, these celebrations brought together the best agriculture and music. More Woodstock than livestock, Moonalice gigs were quintessentially American, combining the vibes of New York, San Francisco and all points in between.

Then came the 20th century. White people got all uppity about sex, drugs, and music. Next thing you know, they outlawed hemp. They tried to outlaw rock ‘n’ roll. And they nearly wiped out the Moonalice tribe, the remnants of which were forced underground.

Fortunately, a new day has begun. A daring sextet of nomads has emerged to revive the tribe, its music, and its legend. The new Moonalice crosses the land, spreading good vibes and giving new hope to millions whose culture had been laid waste by the prohibition of hemp. With each gig, the tribe grows. There is Moonalice in everyone.

Moonalice legend speaks of a mysterious 7th player – a bass player, naturally – who possessed prodigious talent. The spirit of Yggdrassil Moonalice inhabits all Moonalice gigs. And some times, when the stars, sun, and Moonalice align, Yggdrassil appears in body. And when he does, the tribe rejoices.

It is said by those who say such things that the day will come when all members of the tribe will play bass together. And on that day the notion of low will be taken to new depths. Or possibly the notion of depth taken to new lows. As with all things, it’s really a matter of perspective.