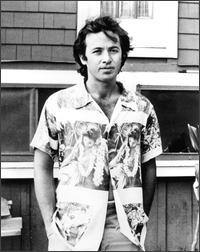 Saturday, October 4, 2008
When Bonnie Raitt, Elvis Costello and Emmylou Harris are sitting in the nightclub balcony, you can bet there's a heavy-duty act onstage. Guitarist Ry Cooder making his first appearance in around 20 years Thursday at the Great American Music Hall qualifies as a major event to a small but select circle, who snapped up $100 tickets to the two-night fundraiser.

In a series of albums he recorded during the '70s and '80s, Cooder fused folkloric musical ideas with rock sensibilities in a unique blend that may not have burned up the charts but attracted a feverishly devoted following. Cooder later moved onto film soundtracks and world-music record production, where he scored an unlikely million seller with a swinging set of Cuban octogenarians who came to be called the Buena Vista Social Club. He doesn't get out much.
»You live in a lucky city,« said his daughter-in-law Juliette Commagere, who opened the evening with an extraordinary 10-piece band that included Cooder's son, Joaquin, on drums. »Ry said he would never play in L.A.«

Typically, it was another musician who coaxed the cranky recluse out of hiding. Audie de Lone is a Mill Valley keyboard player whose son suffers from the rare genetic disorder, Prater-Willi syndrome, which leaves its sufferers perpetually starving. Last year, de Lone got his longtime musical associate Elvis Costello to play two special shows at the Music Hall that launched the Richard de Lone Special Housing Project, and Costello appeared again Thursday, singing a couple of acoustic numbers on his own and climbing aboard the Cooder trio for the encore.

Billed as »Guitar-Bass-Drums,« Cooder was joined by bassist Nick Lowe, another longtime de Lone musical associate, and drummer Jim Keltner. The three musicians (along with songwriter-guitarist John Hiatt) recorded and toured together briefly in the early '90s as Little Village, and backed Hiatt on his classic album »Bring the Family.«

When Cooder performed in the '70s and '80s, he always brought with him big ensembles. He wrapped his own vocals in gospel background singers. His last band featured outstanding instrumentalists such as keyboardist Van Dyke Parks, saxophonist Steve Douglas and Tejano accordion king Flaco Jimenez. He has never before done this kind of casual nightclub performance with just a two-piece rhythm section.

In horn-rimmed glasses and sweatshirt, Cooder looked more like a college professor dressed for the weekend than a rock star. He used only a couple of small vintage amplifiers and a couple of guitars, tuned differently. His style is based on open chord tunings that allow for surprising harmonies. Even on his own records, he is a consummate accompanist and not a flashy guitar showman, so it was not surprising to see him slip most comfortably into that role behind Lowe, feeling his way around as Lowe opened with Little Village's »A Fool Who Knows.«

»There's going to be train wrecks,« Lowe said happily. »There will be car crashes. But that can be entertainment gold.«

While the program stayed close to slow and midtempo pieces, the rhythms left room for Cooder to scoot around and rumble away underneath the booming bass lines, while Keltner casually decorated the beat with subtle, cunning, equally slow tattoos. If it was somewhat tentative, it was also masterful, and when Cooder slipped on the bottleneck and took the mike to sing »Fool for a Cigarette,« the roomful of partisans got what they came to see. The show grew in confidence with every song.

Cooder ad-libbed a verse to »How Can a Poor Man Stand Such Times and Live?« about Sarah Palin and brought the house down every time he reached the chorus. Lowe, who switched between electric bass and acoustic guitar, brought considerable warmth to his hosting, sang like a bird and occasionally pushed the tempos up to a chugging, Johnny Cash drive, dipping into fine songs from his criminally overlooked recent solo albums such as »The Man in Love,« »The Beast in Me,« and »Soulful Wind.« Cooder punched out glistening, economical solos, offbeat accents and offhand flourishes.

The trio returned for an encore of Lowe's »(What's So Funny 'Bout) Peace, Love and Understanding« and the old Arthur Alexander R&B song »You Better Move On«; (he had sung another Alexander song, »Lonely Just Like Me,« minutes before). Costello joined them for some Louvin Brothers and it was over, Cooder waving to the cheering crowd with a sheepish grin, clearly happy, but perhaps a little unsure of what to make of the enthusiasm. Cooder is a brilliant guitarist, a craftsman and an authentic artist in a world of imitators, but he is not Mr. Show Business.

»The syndrome is rare,« said Richard de Lone's mother, Lesley, earlier, referring to the reason for the benefit, »but not as rare as a performance by Ry Cooder.« Lucky us.