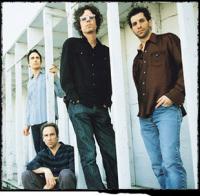 
Reunion tour signals end of the Jayhawks
Chris Riemenschneider, Star Tribune
MADISON, WIS. -- The posters around Luther's Blues nightclub on Saturday said the two singers were »from the Jayhawks.« But both Mark Olson and Gary Louris can officially be referred to as »formerly of the Jayhawks.«

Talking before a reunion concert that Jayhawks fans had waited a decade to see, Louris let slide the news that many fans feared was coming: One of Minnesota's best-known rock acts is no longer an active band.

»I don't think we're going to do anything else,« said Louris, who has fronted the group since Olson quit in 1995. »We felt like we've done that enough. Everybody just wants to do something else. We haven't completely closed the door, but it's pretty damn close. ... I'd say it's dead.«

The Jayhawks were pioneers of rock's alternative-country movement alongside Lucinda Williams, Uncle Tupelo and later Wilco and Ryan Adams. Formed around Minneapolis in 1985, the band issued five major-label albums that, combined, have sold about 1 million copies. Its 1992 record »Hollywood Town Hall« was listed as one of the most essential albums of the 1990s by Rolling Stone and Spin magazines.

Soon after the 1995 radio hit »Blue« brought them more national attention, Olson left the band. He had married singer Victoria Williams and said he was »sick of touring« and »ready to try something else.«

Ten years later, Louris appears to be in a similar position. He has a wife and a 5-year-old son, and is itching to try different career paths, including record production and songwriting for other acts. He recently co-wrote new tunes with the Dixie Chicks.

»When you're on the treadmill [with a full-time band], you never have time to learn anything else,« he said. »I'm enjoying all these new experiences.«

»It seems like it's played itself out,« said Perlman, who has recorded with other musicians over the past year.

The group's other full-time member, drummer/singer Tim O'Reagan, is finishing a solo album that features many of the Jayhawks, including Louris and Olson.

The Jayhawks' manager in Atlanta, Russell Carter, confirmed that there is no animosity.

»They're like brothers,« said Carter, adding: »It's true they're moving on to other things, but my personal feeling is that the Jayhawks are just too strong an entity to ever go away permanently.«

There is some unfinished business among the band members: The first Jayhawks album, a 1986 self-titled independent release, is planned for reissue. There is also a live album yet to be released. An anthology is also a possibility.

That live album will be made up of recordings captured during the Jayhawks' last advertised concerts in the Twin Cities, a sold-out three-night stand at First Avenue nightclub that featured Johnson and another former member, keyboardist/singer Karen Grotberg. In hindsight, those shows served as a sort of last hurrah.

»We didn't plan it that way, but we did make it something special because of the live recording,« Perlman said.

Saturday's concert by Louris and Olson was part of a three-week tour that the old singing partners say they're mainly doing for fun. Outside of an impromptu gig at the 400 Bar in Minneapolis this past New Year's Eve, the pair haven't performed together publicly since Olson quit.

Olson said before Saturday's sold-out concert that he never held any ill will about the band continuing as the Jayhawks without him.

»We wouldn't have nearly as many fans coming out if it weren't for what they've done in the past decade,« he said.

Backed by two other non-Jayhawks musicians, Olson and Louris played everything from a few of their earliest songs together, including »King of Kings,« to music they have recorded separately, such as Olson's »Detroit Custom Railroad.« Crowd favorites included »Blue,«Waiting for the Sun» and «Sister Cry.»

Another song that went over well was «Save It for a Rainy Day,» a minor hit off the Jayhawks' 2003 album «Rainy Day Music.»

Speaking of that record, which sold about 175,000 copies and got favorable reviews, Louris said, «I think it's a good one to leave on.»

Perlman said, «I think our discography is what we're most proud of. We poured our hearts into those albums. They're our legacy."