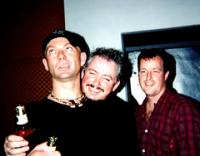 Full of shout-along manifestos and strident tomfoolery from each of their seven studio albums, Waco Express lives up to the mandate given to the mastering engineer to »err on the side of massive, fierce and overwhelming.« Critical darlings since their unleashing, featuring a scribe-ready lineup of members from the Mekons, Jesus Jones, Wreck, Gang of Four and others, as well as a genre-bending fearlessness, The Waco Brothers have always saved their best for the stage. The live shows, particularly at SXSW and CMJ, are events of genuine reverence for their leave-it-all-out-there-this-should-be-FUN-dammit convictions. Over the years, this fervor has resulted in an onstage wedding proposal betwixt two fans (SXSW '02), a riot (Edinburgh '03), and a thousand and one lost nights of sweaty, happy reverie.

Sadly, there's always been the undercurrent of grousing, as good as the studio albums are, that, well, it's not like BEING there. Well, now it is. On Waco Express, you can practically feel the heat from the stage, smell the smoke on your clothes, taste the beery taste of beer and let your ears bask in the un-tempered wall of sound.

When the first Wacos CD hit the streets in 1994, punk AND country were lying torpid, shaming their respective populist histories. Thirteen years later, the problem has gotten nothing but worse, with one shilling for cruise lines and luxury cars and the other blathering on with a jingoistic fervor not seen since Remember the Maine! Quite frankly, we need the Wacos now more than ever.

A politically aware version of honky-tonk, where the beer is spiked with the tears of the working class, the whiskey poured on the rocks of failed dreams... Rocks decisively, coming closer to country's renegade spirit than anything out of Nashville today.» Steve Mirkin, Entertainment Weekly

«Possessed by the demon of rock'n'roll, haunted by the ghosts of old country music... to make matters better, the group's originals are so consistently inspired they come across as instant classics.» Paul Verna, Billboard

«The Wacos hammer out populist anthems for a blue collar world of dwindling wages and dead-end possibilities. They have been turning politics into party music for years--no small trick in a strangely apathetic era--and now their message and music are more necessary than ever.» Greg Kot, Chicago Tribune

«There are God’s honest chops and songwriting going on here. These songs are soul music for the working man/woman, timeless mediations on God’s existence, the merits of grain alcohol and the cost of a hard day’s labor, melted down with a Southern-fried blowtorch into tasty three-minute kernels of truth.» Corey duBrowa, Magnet