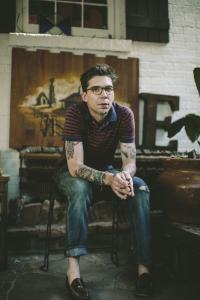 Bloodshot Records is pleased to announce a multi-album, world-wide agreement with Justin Townes Earle. His debut full-length album, The Good Life is slated to hit stores in Spring 2008. Justin will make appearances at SXSW and tour with The Felice Brothers in March and April.

With Justin Townes Earle’s pedigree comes mixed blessings. As the son of legendary singer/songwriter Steve Earle, high expectations are the name of the game; but he’s shown that he is up to the task, crafting stark portraits with elements of acoustic blues and folk. After a misspent youth in bluegrass/ragtime combo The Swindlers and the louder, more rocking The Distributors, the 25-year-old cleaned up his act, dropped his self-destructive habits and began to focus on songcraft. With inspirations as diverse as Townes Van Zandt (he was named in honor of the elder Earle’s hero), The Replacements, Ray Charles and The Pogues, Justin forged his own brand of American roots music. His self-released EP Yuma received great notice in Nashville Scene, Leo Weekly, The Bohemian, Twangville and others, attracting the attention of Bloodshot Records. Look for Yuma to become available in wide release through Bloodshot soon.