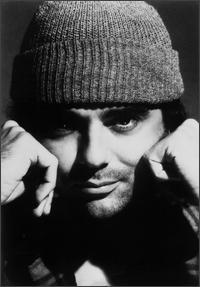 »The mystery of the recording studio is what keeps me coming back. Many rewards have come to me through this laboratory. It is my temple, my domain, my frustration and my love. But most importantly, it is my place of innovation. The ultimate drug for me is the ever slippery creative process. My greatest joy in this has come from my associations - the creative, musical and lyrical minds that I've been lucky to work with through years of record making. A friend recently suggested that I turn on a camera and try to capture the elusive process. Adam Vollick followed me around the studio to see if we could unveil some of the mystery.”

“Here Is What Is” is a sonic, filmic, journey to unique and captivating places from the last year and a half of Lanois’ life. The camera work is classic, uninterrupted and deadly committed. The film opens with a magical performance on the piano by Canada's national treasure, Garth Hudson. The film includes moments of Lanois philosophizing with his old friend Brian Eno during an exotic visit to Morocco, where the Eno Lanois production team has been working with Irish friends, U2. Lanois also travels to the birthplace of the groove - the Deep South, Shreveport, Louisiana and sits in with Brian Blade at the Zion Baptist Church where a roaring rendition of «This May Be The Last Time" is delivered by Brian's father, Brady Blade Sr.

Lanois' psychedelic past continues to haunt him throughout the film as the hyper-realism of the in-studio documentation is contrasted by moments of wild fantasia. The heart dedicated to verite is also hungry for the unknown. Lanois also invites us into his studio to look over his shoulder at a mix being performed live, while he explains his moves and the musical reasons for making them. He explains how he stumbled into being a record producer, naively, through his love of music.

“Here Is What Is” is arguably the best rock-n-roll film of 2007 with guest appearances by Garth Hudson, Brian Blade, Eno, U2, Willie Nelson, Emmylou Harris, Aaron Neville, Billy Bob Thorton and maybe even Sinead O'Connor.

“HERE IS WHAT IS”

All Music by Daniel Lanois