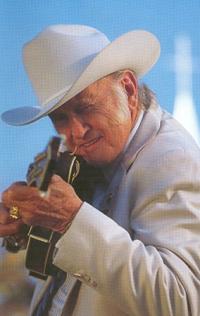 
Settlement in Bill Monroe Mandolin Fight
By JOHN GEROME, AP
NASHVILLE, Tenn. (AP) - The son of bluegrass music pioneer Bill Monroe and a
Kentucky foundation - fighting over ownership of the legend's prized mandolin
- reached a settlement Friday, just days before a trial was to have opened in
the dispute.
»Having a trial staring you down always seems to focus you on the issues at
hand,« said Gerard Stranch, attorney for James Monroe. The trial had been set
to begin Monday.
Terms of the settlement were not immediately available. Monroe's 1923 Gibson
F5 mandolin - bought from a Miami barbershop for $150 in 1943 and considered a
key to his stylistic development - has remained in a locked vault during the
dispute.
James Monroe agreed to sell the mandolin to the Bill Monroe Bluegrass
Foundation of Kentucky in Rosine for $1.1 million in October 2002. The group, headed
by Campbell Mercer, paid $162,500 before a financing deal collapsed. Stranch
said his client then tried to void the contract to seek other buyers.
The case began when Mercer got the federal and local governments interested
in providing money for a museum to spur development in Monroe's native Ohio
County in Kentucky, where more than 17 percent of the 23,000 residents live in
poverty.
A lawyer for the Ohio County Industrial Foundation said the group helped
underwrite the Bill Monroe Foundation, purchased 84 museum items and put up the
initial payment for the mandolin.
But relations between the industrial foundation and Mercer turned sour, and
he sued the group separately for breach of contract.
»Both parties are pleased. I think this is a good resolution for all
parties,« Stranch said of Friday's settlement. He said it would be submitted to the
Davidson County chancellor for approval Monday.
The elder Monroe played his prized mandolin for more than 50 years, the last
time on March 15, 1996, at the Grand Ole Opry. He suffered a stroke the next
day and died later that year.