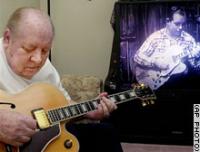 Even Chet said Hank Garland was the best

Hank »Sugarfoot'« Garland, whose short, spectacular career as a Nashville guitarist led greats including Chet Atkins to call him »the best who ever played here,« died Monday evening of a staph infection in Orange Park, Fla. He was 74 and was revered as an innovative force in country, rock and jazz music.

Mr. Garland was among the standout players in a group of session musicians called »the A-Team,« a collection known for sophisticated arrangements and virtuoso chops. The A-Team's musicianship shaped and defined the »Nashville Sound,« which helped country music emerge from rural roots and find national and international popularity.

With Jazz Winds' release in early 1961, Mr. Garland seemed primed to become the first superstar jazz player to emerge from the Nashville studio scene. But on Sept. 8 of that year, an automobile accident left him with brain damage and insufficient coordination to ever re-emerge as a musician.

»I can't even imagine what he would have become had he not been in that accident,« said Brad Paisley, a guitarist and contemporary country hit-maker who received a Grammy nomination last year for his own version of Sugarfoot Rag. »You're talking about 40 years of lost innovation that could have come only from him.«

Born just outside Spartanburg, S.C., Mr. Garland was discovered at a Spartanburg music store by Grand Ole Opry performer Paul Howard. Shortly after his 16th birthday, Mr. Garland moved to Nashville and began a remarkable career that found him recording with Presley, Brenda Lee, Hank Williams, Eddy Arnold and others.

»He'd work a country session for Stonewall Jackson during the daytime, then go out and play astounding jazz in a club at night,'' said Duane Eddy, a Garland fan who became rock's first instrumental star with Rebel Rouser. »And he wrote one of the all-time great country instrumentals with Sugarfoot Rag. That's the first I heard of him: playing Sugarfoot Rag on the Opry, just driving the folks wild.«

Mr. Garland may have been the fastest guitarist in Nashville, but he was also a master of melody, harmony and tone. Though his recording career lasted less than a decade and a half, his musicality was such that Nashville's best-known guitar hero, Chet Atkins, said in 2000 that Mr. Garland was Music City's best-ever guitarist.

»Chet was not wrong,« said Harold Bradley, an A-Teamer who took over for Mr. Garland after the accident as the most-recorded guitarist in Nashville. »I'm very humble about my playing, because Hank Garland is the standard.«