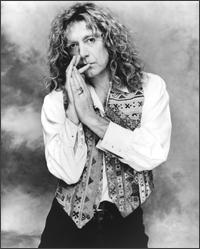 Plant tells Billboard.com that he and Ertegun began talking about the project -- a follow-up to the platinum 1984 EP »Volume One,« which featured Jimmy Page, Jeff Beck and Nile Rodgers, among others -- after Plant was part of a tribute to Ertegun last June at the 40th Annual Montreux Jazz Festival.

»We agreed to carry on and create a Honeydrippers thing a little bit later on in 2007,« says Plant. »He was suggesting material and stuff like that. I knew he was thrilled with the idea of it, and so was I.«

But Plant decided there was no reason to continue the project without Ertegun's involvement. »I would only do it because I wanted the whole rapport with him and his history,« Plant says. »I had an idea of doing 'Stay Alive' by the Clovers, which is on the flip of 'Love Potion No. 9,' and then he could tell me some more stories about Bobby Darrin. That's what would have made it worthwhile.«

However, Plant is resurrecting the original lineup of the Honeydrippers -- which included guitarist Robbie Blunt, who played on Plant's first three solo albums -- for a »one-off« Valentine's Day charity gig in Dudley, England, to raise money to pay for brain cancer treatments for a mutual friend, Jackie Jennings.