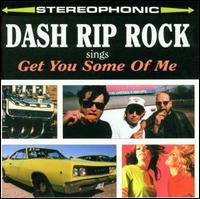 Dash Rip Rock
Get You Some Of Me
(Diverse)

Straight-ahead rock & roll in the Southern tradition, with plenty of indie rock energy to boot, is what has kept Dash Rip Rock going since 1984. A trio comprised of vocalist/guitarist Bill Davis, bassist Ned »Hoaky« Hickel, and drummer Chris Luckette, the group formed in 1984, originally with Fred LeBlanc on drums, though he left in 1989 (after the Mammoth label LPs Dash Rip Rock and Ace of Clubs) to found Cowboy Mouth. The duo then recruited Luckette and recorded 1990's Not of This World with producer Jim Dickinson. After the concert record Boiled Alive!, Dash Rip Rock left Mammoth Records and released 1993's Tiger Town on Doctor Dream. Two more label switches, from Sector 2 to Naked Language, preceded the release of 1995's Get You Some of Me (after which Luckette left the band) and 1996's Dash Rip Rock's Gold Record. Paydirt followed in 1998. In 2002 the trio released Sonic Boom, followed by Recyclone in 2005 and Hee Haw Hell in 2007.