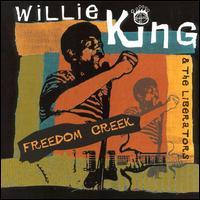 Bluesman Willie King's mentor, Mississippi musician Albert »Brook« Duck, once explained to Willie that most blues lyrics which have man/woman relationships as their subject actually reflect misguided, pent-up hostility resulting from not having an outlet to express frustration at the real oppressor: »the people with the money.« Willie King took that revelatory message to heart, going after the root of the problem in his gutsy music and lyrics. In the liner notes to Freedom Creek, Liberators' guitarist Aaron Hodge is quoted as saying, »I think Willie King is more of a Bob Marley kind of guy, grassroots, and really striving.« Willie King & the Liberators' music is gritty enough to please fans of R.L. Burnside or Junior Kimbrough, while King brings another dimension to blues poetry by focusing on national unity, change, and especially fighting corruption. The titles tell the story: »Let's Come Together (as One Community),« »Stand up and Speak the Truth,« »Clean Up the Ghetto,« »My Boss Man and My Baby,« and »Pickens County Payback.« It's unfortunate that some of the music wasn't tightened up; it occasionally rambles and bogs down into unnecessarily lengthy jams. Nevertheless, Freedom Creek is an important release with righteous lyrics and a refreshing lack of over-production -- it will prove timeless.