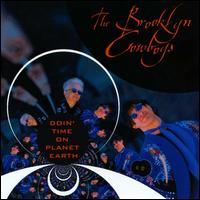 Raised in Washington, D.C., Walter Egan -- best known for his '70s hit »Magnet and Steel« -- returns to his East Coast honky tonk roots with the Brooklyn Cowboys, a pseudo-superband comprised of established country rock vets. Bassist Michael Supa did time in the Ozark Mountain Daredevils, pedal steel-meister Buddy Cage was a major player in the New Riders of the Purple Sage, singer/songwriter Joy Lynn White maintains a substantial career as a solo artist, and the whole shebang is produced by Al Perkins who added authentic country twang to the Stones, Manassas, and most notably the Flying Burrito Brothers. It's the latter band whose ghost haunts this set, as Egan -- writer of the beautiful »Hearts on Fire« that was recorded by Gram Parsons and Emmylou Harris on Grievous Angel and is reprised here -- plays Parsons to White's Harris on many tracks. Egan shares the low-key plaintive vocal qualities of Parsons, and these songs -- most co-written by Egan and drummer/co-founder Fredrough Perry -- could easily have been included on either of Parsons' two Burrito or solo albums. »Californ',« »Juke Box Girl,« and »Learn How to Love Me,« while not as dramatic as Parsons' best work, echo with his sense of »cosmic American music« as bits of soul, Tex-Mex, and even zydeco pepper the hardcore honky tonk arrangements. Vassar Clements' rootsy fiddle adds even more authenticity, but it's on tracks like the yearning »Exquisite Torture« where the band sounds as authentic as if they were born and raised on a back road in the South. White, who provides only backing vocals, is sadly under-utilized here, yet it's her aching voice that provides the album's most heartbreaking sounds. Egan's singing is certainly respectful but lacks the effortless soul resonance of Parsons', and some of the tunes like the jaunty, enthusiastic, double-time »Burning Bridge« and the by-the-numbers country rocking of »Wishful Drinking« sound a little forced, if not quite clichéd. Egan may not have the offhand charm or visionary genius of Gram Parsons, but with this sturdy debut the Brooklyn Cowboys prove they are talented and resourceful musicians, who, though they don't push the boundaries of the hardcore C&W music they so obviously love, work remarkably well within its confines.
- All Music Guide