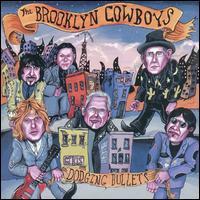 Forget the seeming oxymoron in their name, the Brooklyn Cowboys deliver the real goods with no dispute. This is a group of veteran musicians that has done many one-nighters with a variety of bands: from the Amazing Rhythm Aces (Jeff »Stick« Davis) to New Riders of the Purple Sage and Bob Dylan (Buddy Cage), this band can walk that walk that only comes from experience. This veteran group has blended a sound that unites two strands of a musical juggernaut. This twangy and hard-driving band melded together 14 songs that are a product of the whole band. It seems to be a whole group effort this time out, and in that sense it is more cohesive as a disc. The songs rock when they rock (»I Was Wrong,« written by Perry Egan), and when they are country, they have that hard twang of deep country (»Trick Ponies,« written by Brian Waldschlager). It is taking this combination of two distinct styles and fusing them that carries it that one step further. Neither of the elements are missing from any song; however, the songs make a true amalgam of the two disparate styles, while remaining predominately in one of the frameworks. Walter Egan's vocals are in top form, and he is joined on several cuts by either Lona Heins (two cuts) or Jo »Lynn« White (two cuts), both of whom add a pleasant contrast in vocal styles. The playing by everyone is stellar throughout the disc. Jeff Davis (bass) and Fredro Perry (drums and group founder) anchor the group with their tight rhythms, allowing the rest of the band to soar and explore, led by Buddy Cage's steel guitar. Though there is anomaly in the group's name, that is the only place where you will hear it. (Just for the record there are a few top-hand cowboys from Brooklyn hiding out in the Arizona and New Mexico hinterlands.)