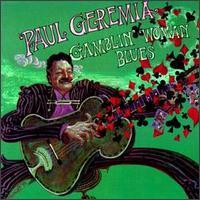 Since his recording debut in 1968, Paul Geremia has been one of the best white acoustic bluesmen working, for his expressive singing as well as his dexterous playing. A native of Rhode Island, he originally came to blues by way of the 1960s folk boom, but unlike a lot of other players on that scene, he never went electric. His influences from an early age include Woody Guthrie, Blind Lemon Jefferson, Big Bill Broonzy, Tampa Red, and King Oliver.

The most recent album by Geremia, “Gamblin’ Woman Blues” is an acoustic blues jewel, with superb renditions of songs by Barbecue Bob (»She Moves It Just Right«), Blind Lemon Jefferson (»Cheater's Spell«), Blind Willie McTell (»Blues Around Midnight«), and Skip James (»Special Rider Blues«), as well as some first-rate traditional-style originals. Del Long and Rory McLeod back up his six- and 12-string work on piano and upright bass, respectively, in this spare, authentic-sounding acoustic folk-blues outing. Eric Von Schmidt provided the cover art.