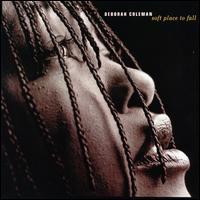 A powerful guitarist and an expressive vocalist, Deborah Coleman is a major force in the blues world. Deborah Coleman detected a void in the music stratum and successfully filled it: A lead guitarist/vocalist playing the in the male dominated world of blues-rock. Others like Bonnie Raitt and Marie Muldaur have contributed to varying degrees in the contemporary blues scene (and other styles) but Coleman with her string of five consistently strong albums in only seven years demonstrates that she is serious about her craft and knows her calling as a blueswoman.
On “Soft Place To Fall”, her 2000 album, she wrote three of the 11 cuts, and they're the best of the lot. »What Goes Around« is a good 12-bar tune about cheatin' and messin' around; »Another Hoping Fool« is a slinky blues number about waiting by the telephone for that reassuring late-night call; and the title track sounds much like a Dire Straits tune, especially in the spare guitar playing of Coleman and Jack Holder. Coleman interprets Little Johnny Taylor's »If You Love Me Like You Say« in a cool funk mode, jumps into the direct blues of the adapted classic »I'm a Woman,« and rocks the Jerry Williams number »Nothin' to Do With Love,« which has all the potential to be a legitimate hit. On the boogie beat of »Don't Lie to Me« and the hard swing of the getting-back-to-love statement »So Damn Easy,« Coleman changes up a bit to a more authentic blues style. She rocks on the simple »Look What You Do to Me,« rocks even harder for »Confused,« and goes into a more Southern-rock area on »The Day It Comes.«
Deborah Coleman is right on the trail of eclipsing Sue Foley, Debbie Davies, and Susan Tedeschi to take her place as the high priestess of contemporary blues. Almost there yet, she definitely has all the tools and musical ability to reach that lofty perch.