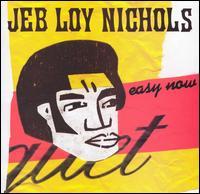 In 1990, Jeb Loy Nichols formed the critically praised Fellow Travellers with vocalist Lorraine Morley. After the Fellow Travellers disbanded in 1999, Jeb Loy Nichols finally started his solo-career, giving brith to a range of wonderfully twisted Roots albums, of which the 2002 effort “Easy Now” is undoubtedly a highlight: Jeb Loy Nichols sounds perpetually relaxed, always singing a bit behind the beat, gently swinging, soulfully slurring syllables. He’s a world-traveler, having grown up in the midwest then journeying to New York and London before ending up in Wales, and his music, from „Lovers Knot” to “Just What Time It Is” to the aptly title “Easy Now”, strolls a line between reggae, soul, and, more so this time, country. He’s part Toots Hibbert, part Al Green, part George Jones.

„Easy Now” is Nichols’ most direct album; recorded with his core touring band, the album has a live, lived-in vibe, with fewer of the production add-ons that thickened his previous albums. The songs stay in a languid, soulful groove, whether they have an understated funky backbeat, as in “They Don’t Know,” or a tinge of delta blues, as in “Sure Felt Good To Me,” or just a simple, acoustic guitar strum, as in “Mostly Bittersweet.” That groove is a blessing and a curse: by the end of „Easy Now”, the songs blur together into a warm and fuzzy haze that’s soothing but a bit indistinct.

„This is why this album succeeds where other alt. Country mavericks like Lambchop often fail. Kurt Wagner's combination of Curtis Mayfield, Phil Spector and George Jones often comes across as a little too calculated and post-modern. Jeb's sunny use of everything from Willie Mitchell to Adrian Sherwood (with whom he shared a flat!) springs from a purer love and appreciation. These are not songs filled with surreal invocations but just paeans to love, life and the simple pleasures that make it all worthwhile.” (MOJO)